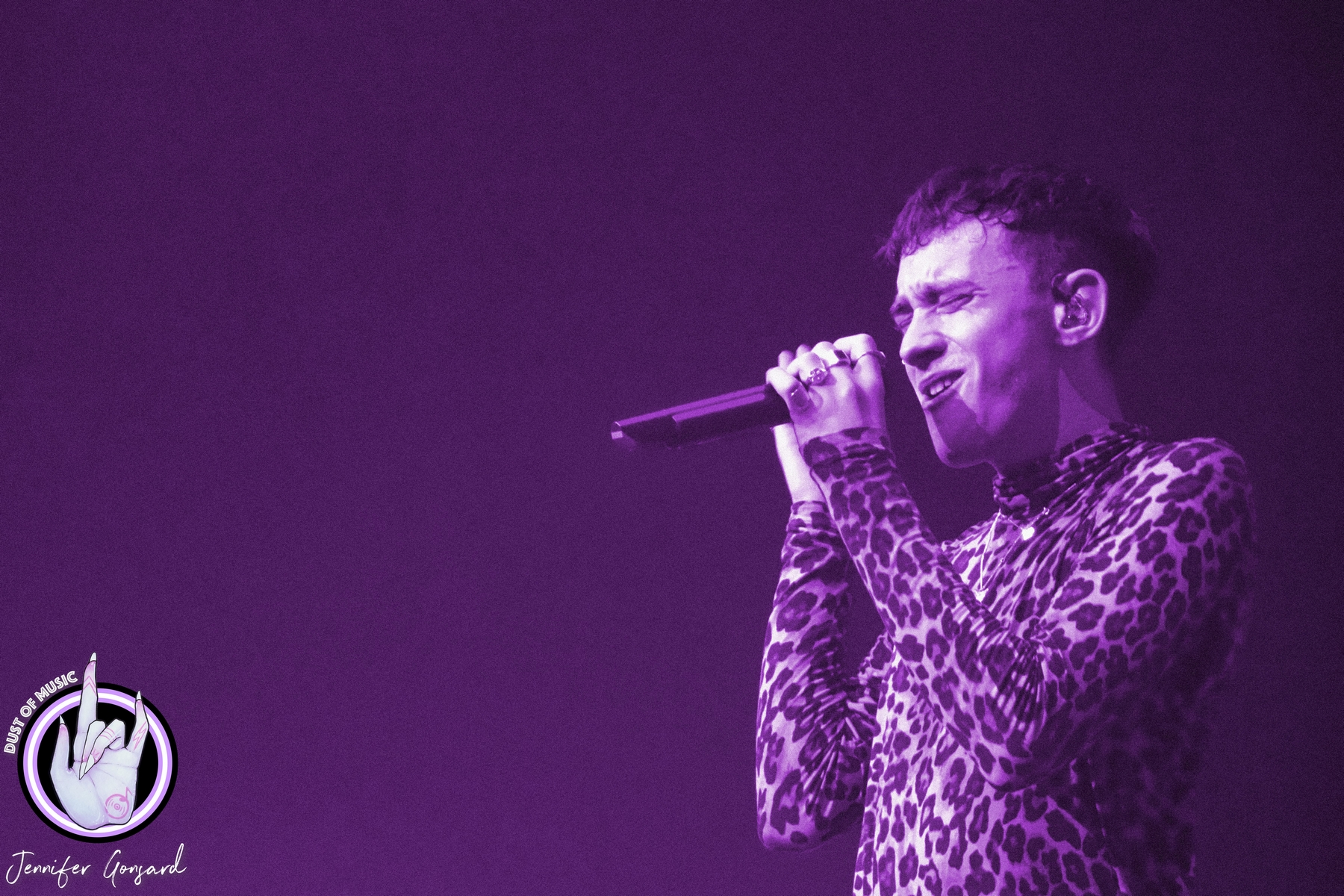 Although they performed at Lollapalooza in Paris last summer, British band Years & Years had not returned to perform for a while in our French venues. Working on their second opus, Palo Santo, the trio had chosen to scarce itself until the release of the album last July. It is early 2019 that they decided to return to party in Paris. Here’s a story of a sold out evening at La Salle Pleyel.

As an early fan of Years & Years, it is very interesting for me to watch this group evolve over the years. With each new announcement of a concert I can attend, the excitement is real. But I have to confess that seeing that they were back in Paris at La Salle Pleyel, a concert venue that I never did, had me some anxieties. Were they still good? Will the soul of the first intimate concerts still hover over our heads? Questions that I was able to ask myself until the lights went out in the room.

Once in La Salle Pleyel, I am surprised by the average age of the people here this evening. A little younger than in my memories or is it me who has just aged? As we wait for the performance of Years & Years, it is the pretty Astrid S who begins the evening. Full of energy and always smiling, her good mood brings an amazing aura around the audience that seems seduced by her talent. It’s always a pleasure to see artists having fun on stage and having fun. She alternates between vocal demonstration during slow titles and improvised choreographies on more pop tracks, which makes us want to dance. A little more for her speech before singing Such a Boy, last title she will give us that night and in which she pushes men not to be afraid of their emotions by being free to show them to the world. Words that will have an ovation before giving way to calm while waiting to welcome the British trio. 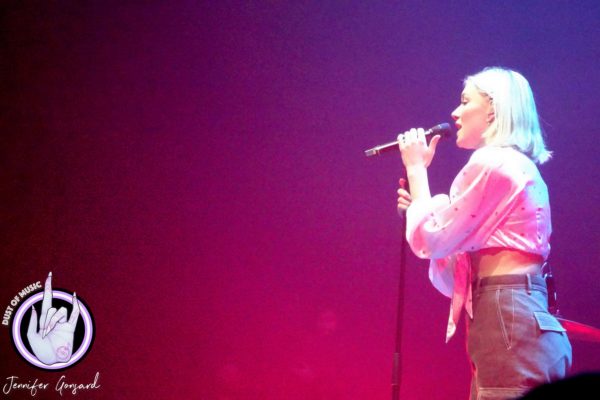 The atmosphere is at stake

It is 9pm sharp when the light of La Salle Pleyel goes off to let the scenery of Years & Years rise to the bottom of the stage. On the first chords of Sanctify, first single of their second album Palo Santo, choristers, musicians and members of the group appear in front of a packed room. It is at the last moment that the singer, Olly Alexander arrives in a mid-holiday outfit skiing and half leopard to sing the first words of the evening. He is accompanied by fans, also determined to make their voices heard. Shine resonates in the assembly, which has a great success with the fans as they keep on singing and dancing. There is a very good atmosphere from the beginning of the set and it promises a great show. 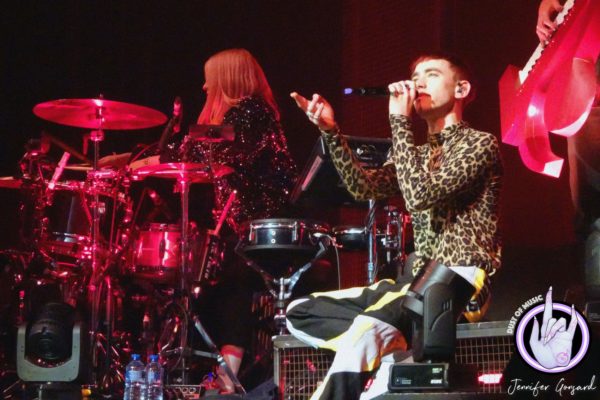 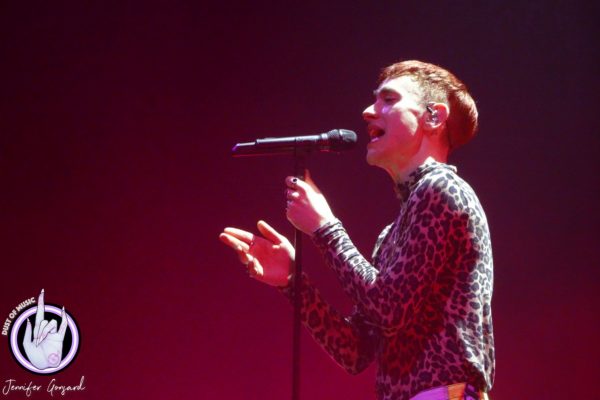 Olly will apologize by announcing that there will be more titles of the second album Palo Santo than the first, Communion, during the concert. Which is normal but we feel that he is aware that most of those present want to hear the flagship titles of Communion. Karma and Meteorite follow each other to let the sublime Shut Eyes settle in La Salle Pleyel. It’s an Olly Alexander on the piano who sings the lyrics of this title, a classic for those who have been lucky, like me to be able to attend the first Years & Years concerts. Little nostalgic return during which, I admit, I did not really pay attention to the following performance, Lucky Escape which is a title that I’m not in fond of usually. 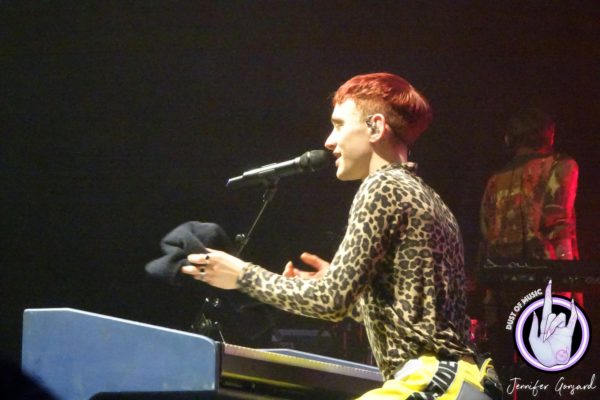 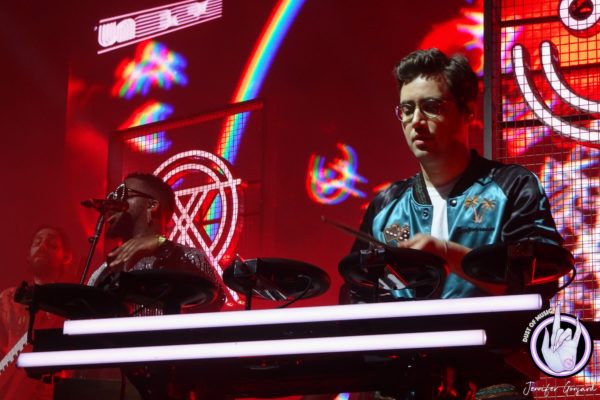 I am back from my thoughts when I hear the first chords of Gold. Gold as well as Desire make me nostalgic for the old days when I was traveling in Europe to support this band that I love so much. Many memories are resurfacing and it’s a real pleasure. It seems to me that I did not stop smiling during the concert and to have fun from beginning to end, without thinking about the people around me.

And during this time, I observe the group and I see them taking a real pleasure on stage. As I said with Astrid S, it’s so nice to feel that artists like what they do and like to share it with the people in front of them. Olly does not stop smiling, just like me over titles and keeps on moving strangely through his choreographies. His particular gestures are an integral part of the scenography of the show. The atmosphere is only increasing and all La Salle Pleyel is standing, from the pit (obviously!) to the balconies where all people waddle. 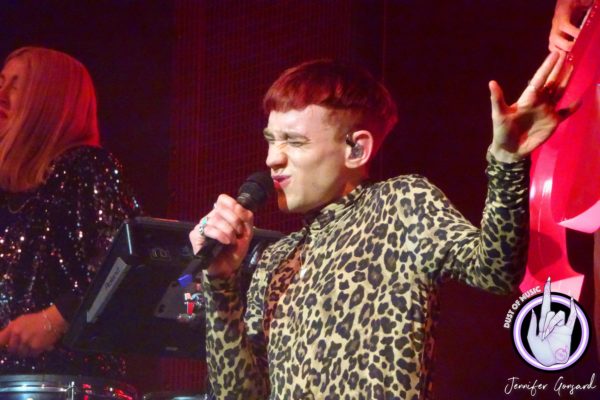 Palo Santo has a place in this eventful setlist. The images at the back of the stage, on the screen, as well as on all the structures on stage agree to put our eyes on it. Mixing the voice of Olly, those of the singers and the rhythms of Emre and Mikey, it is an intense moment that I am living. I almost do not want to sing and just watch what’s going on around me. Fancy short, once I recognized the first chords of my favorite title of the group, Ties. Another moment of nostalgia seizes me and I am very surprised to see that Years & Years has chosen this track for the setlist of this tour while Take Shelter, which is a huge success for them is not included. Preacher and Hallelujah follow each other, dancing all the floors of La Salle Pleyel. 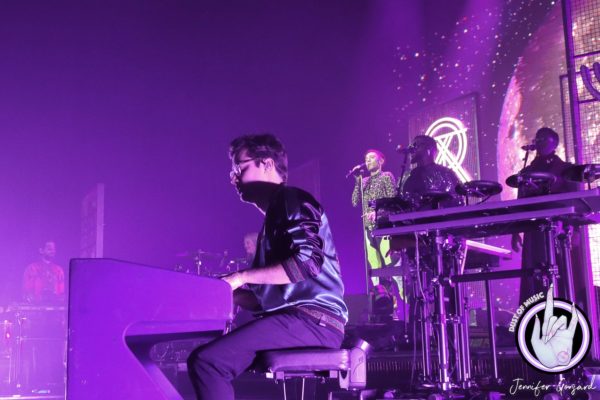 The atmosphere is festive and the concert goes too fast. It’s always this feeling that comes out when a concert goes well and is that good. Time to catch his breath, the group puts forward his two singers, Joell Fender and Phebe Edwards who will each perform their turn No Tears Left to Cry by Ariana Grande (sung by Phebe) and Like a Prayer by Madonna (sung by Joell ). Two performances applauded by the audience. A reaction that will affect both artists and motivate them even more for the rest of the evening. They will go wild on Worship, Rendezvous and If You’re Over Me after each other. Needless to say, Olly continues his dances and his movements that go out in all directions during these titles, especially If You’re Over Me, whose clip gives you a glimpse of what he offers on stage.

A feeling of freedom spreads in La Salle Pleyel

Years & Years returns for a three-song reminder, after La Salle Pleyel tremors and screams from the fans. All For You puts everyone in a trance. The aura that is felt in the pit is special, again and we feel a certain freedom. Freedom to dance, to sing, to have fun, to live the present moment without worrying about the eyes of others. A large part of the public this evening is part of the LGBTQ community. Especially thanks to the many things Olly Alexander has said or done for it. The many couples do not hesitate to show their love. It’s like a sense of security hovering around them and fucking, it feels good to see that.

When the title that blew the career of the band begins, King, it’s the total euphoria in whole room. The couple kiss each other, the friends jump holding each other’s shoulders, the soloists meet. Young and old come together to make communion, without a bad word. Meanwhile, Olly, Mikey, and Emre go off too. Accompanied by their drummer Paris, who mastered her instrument to perfection during the whole concert and choristers who exchange between them. We feel a real good harmony between them all. 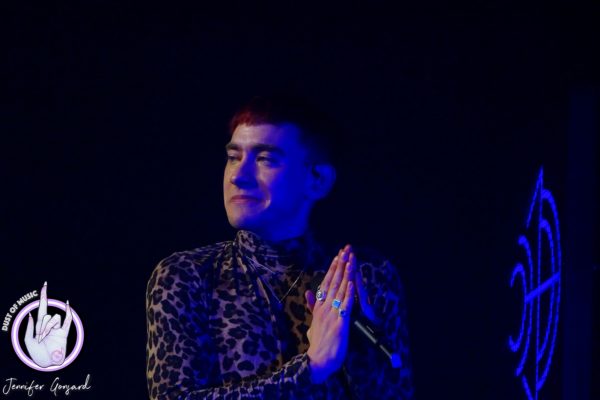 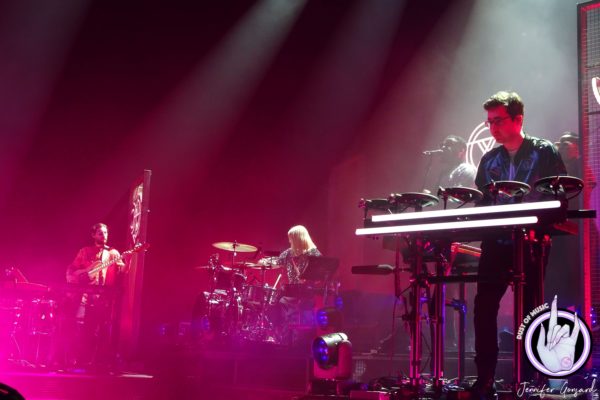 This concert was a real pleasure. Between the atmosphere present among the public, the desire to enjoy thoroughly without worrying about people’s eyes, the group’s happiness on stage, the whole evening was really perfect. The performance of the British is improving more and more over the years and again, it is really nice to see their evolution and the happiness that it gives them. They remain the same at the beginning, with more scenic means and an audience that has changed somewhat. Years & Years has been on the music scene for a while and will count on them for a few more years.