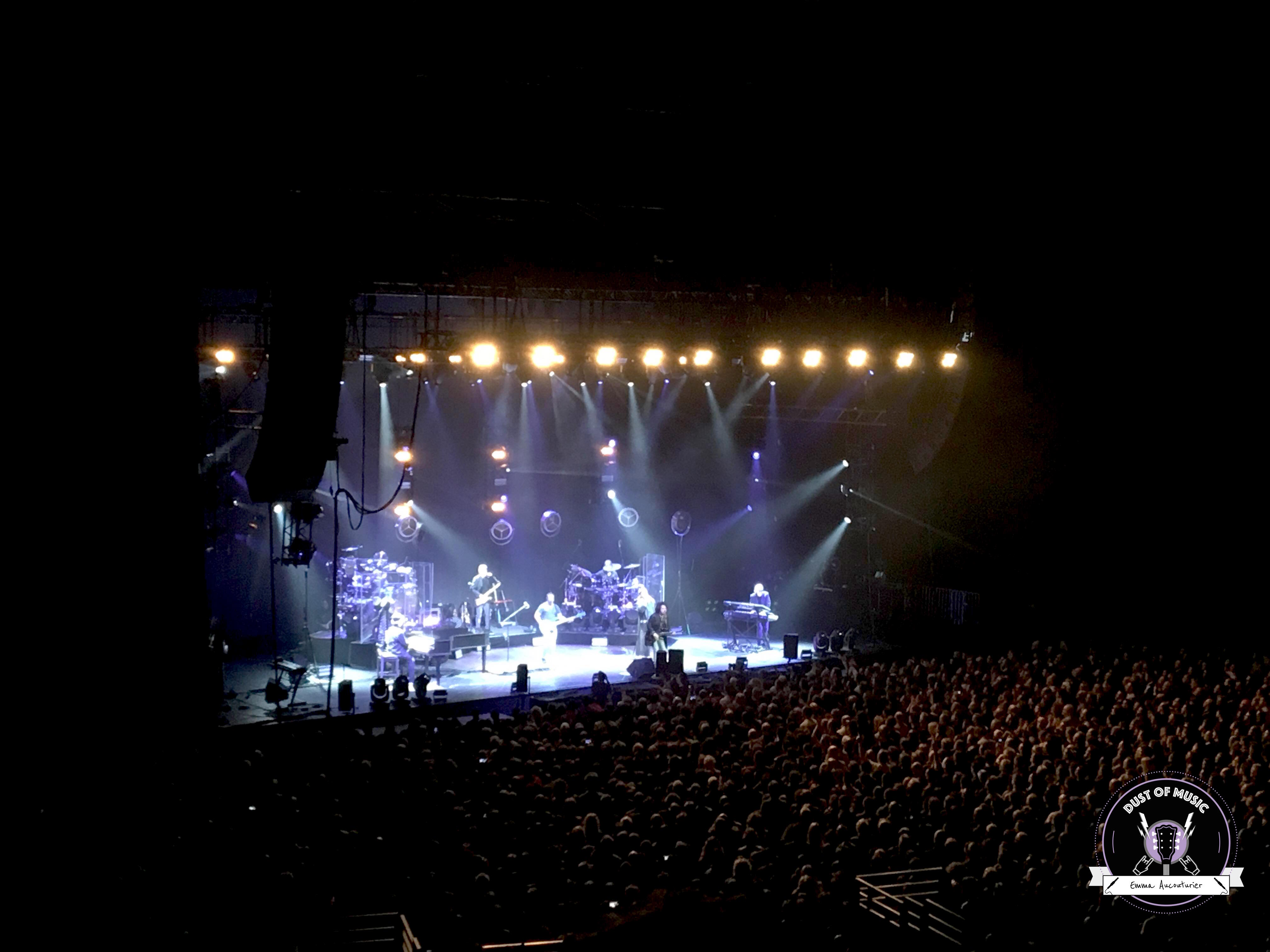 Last Friday, legendary pop-rock band Toto performed at La Seine Musicale in Boulogne-Billancourt (Paris). A retrospective concert that has delighted Parisian audience with old and new hits! Dust of Music was there and we’re ready to tell you a bit more about this amazing night.

For some of you, Toto is just a head (French joke sorry). However, this is in our music world, a mythic American group made up of talented studio musicians who delighted the 80s. But Toto is obviously more than that. After 40 years of career, the band still led by David Paich, Steve Lukather and Steve Porcaro still rocks it. As part of their anniversary tour, 40 Trips Around The Sun (which is also the title of their new album greatest hits), American musicians were at La Seine Musicale in Boulogne-Billancourt (92) to give a concert in tribute to their sublime adventure.

Arriving on site, lots of people in their fifthies are gathered. I must admit that I am asking myself : “what I’m doing there?”  Nevertheless, I look a bit around me and I definitely feel excitement ! I see people wearing Toto t-shirts, some dating back  then ten or twenty years. Fans of the first hour are here!

Inside, La Seine Musicale is packed with a large standing crowd. A sequence of epic melodies follows before the concert venue is plunged into darkness. After a few seconds,the curtain falls and the musicians appear on stage: David Paich at the piano with his famous hat, Steve Lukather as an old rocker with a black biker jacket and silver necklaces and Steve Porcaro on keyboards with a black suit that contrasts with his bandmates. The trio is always accompanied by Joseph Williams on vocals, who wears a Matrix-style long open coat, a black beret and round and tinted sunglasses. Four other musicians are also on stage: Shem von Schroeck on bass, Lenny Castro on percussion, Shannon Forest on drums and Warren Ham on saxophone and vocals.

The concert begins with Alone, one of the new songs from the band’s 40th anniversary album released on February 9th. Energy is there, Steve Lukather is still crazy on the guitar and Joseph Williams‘ voice seems intact, although it is supported by Warren’s. The first tube arrives and Hold The Line introduction drives everyone crazy.  The audience suddenly ignites and everyone sings with their heart. Lovers in the Night comes then and before Spanish Sea, new song that has been written however in the wake of Africa (they used a similar rhythm). A little further, the jazz-fusion super-instrumental Jack To The Bone begins the end of the first set, which finally ends with another classic of the group, Rosanna.

The second set takes on a more acoustic dimension with a stage restructuring : stools are installed to create a certain closeness with the audience. Now, it’s just the musicians and the audience, as if we were in a small club, although we are still in the big venue of Boulogne-Billancourt. This part of the show allows us to revisit old songs of the band, some of which were played once or never live. Steve Lukather and David Paich play the game by giving small anecdotes regarded songs to discover or even re-discover the history of the group. We start with Miss Sun, one of the first titles recorded by Paich / Lukather / Porcaro. Then, the musicians play a quieter version of Georgy Porgy, however very short (just a verse and a chorus).

For those who are novice in Toto‘s history, they will tell you that they are the ones who are behind Michael Jackson’s Human Nature. The band alternates with songs from their old albums and more recent ones, which is a nice retrospective set. The musicians’ little stories make us laugh and we appreciate very much this transition period between the two scenic sets. Stop Loving You closes this second part, title from the album The Seventh One (1988) and already sung at the time by Joseph Williams.

The third and final set of the concert starts with the energetic Girl Goodbye, released in 1978. The band will pay tribute to British mythic group The Beatles with a touching cover of While My Guitar Gently Weeps. Finally, Steve Lukather will ask at the end of Make Believe: “Do you want to hear the song?” At this moment, everyone has understood what song the guitarist is referring to. Castro percussions begin and we recognize THE song. Some warm colors highlight the stage and the audience goes wild : everybody is standing up and start to dance and sing with Joseph Williams Africa‘s famous lyrics. An encore incites the band to come back on stage to play The Road Goes On. There’s nothing better to end this legendary concert during whom Lukather, Paich, Porcaro and others proved once again that there is enough in reserve!

If you wanna see the first set of the band’s show at La Seine Musicale :

Encore : The Road Goes On