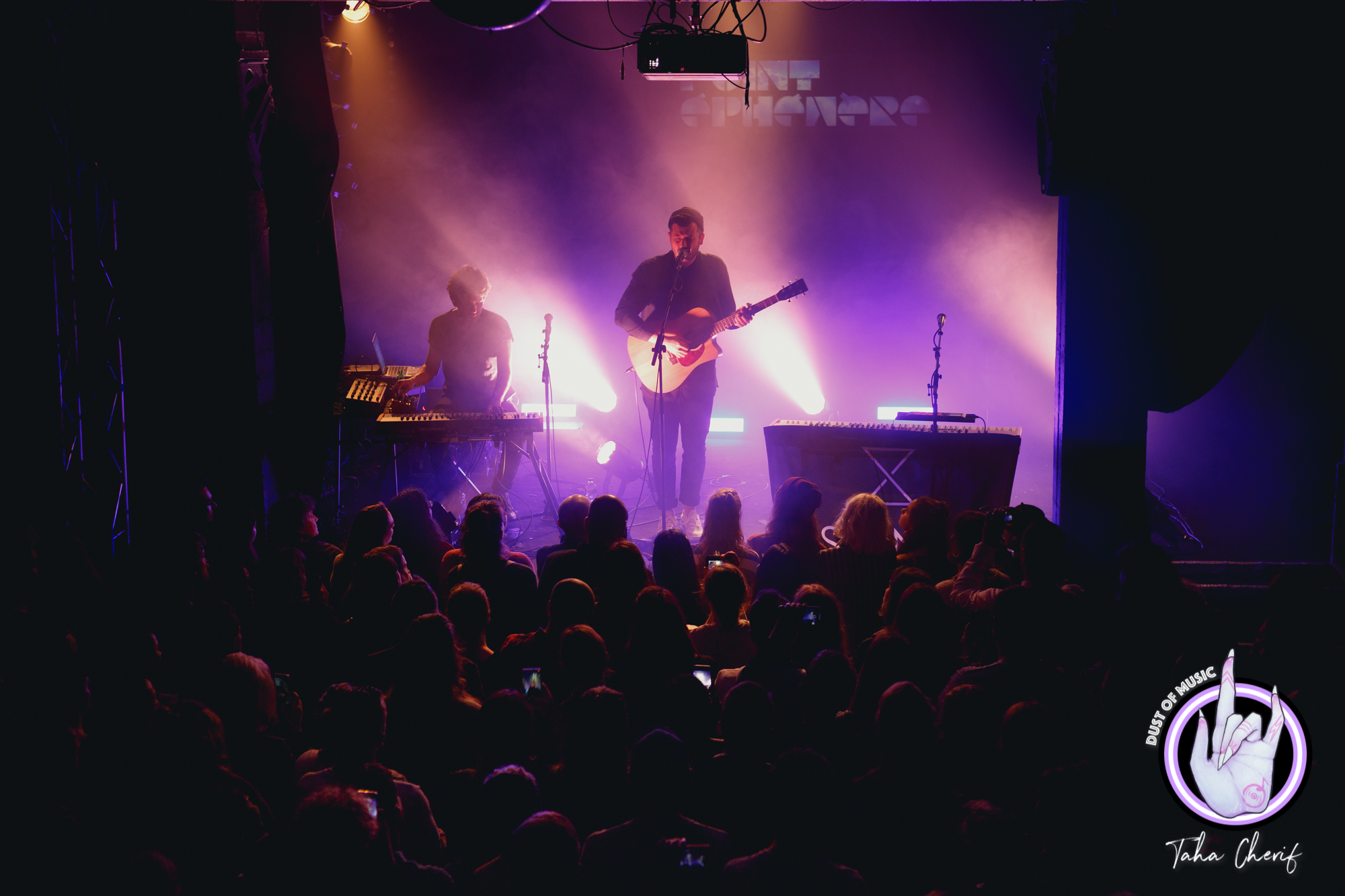 SYML at the Point Ephemere in Paris: playing with an open heart6 min de lecture

SYML is an artist whose genre is indescribable. Oscillating between experimental, pop, indie, rock, he uses different instruments to support an airy, yet strong voice, resulting in a calm, surprising and soothing sound. He played the Point Éphémère for his second Parisian date this year.

I came across SYML while I was looking for new music. He had just released his EP Hurt For Me, but hadn’t any material under that name yet. Indeed, he was part of a rock band called Barcelona, but decided to pursue a solitary project under the name of SYML. Raised in Seattle, his texts echo the doubts and questions he asked himself throughout his life: adopted, he built himself in the United States, and learned later that he had welsh roots. Love, identity, comfort and reinsurance are recurring themes, lifted by a vast array of genres.

From a stylistic point of view, his music is diverse. The techniques employed are eclectic, subtly mixing keyboard, guitar, chords, samplers and vocal effects. But his music is far from monotonous. He has indeed developed, across the years and through his various EPs, an own identity that evolves and moves, transcending genres. From a calm and classical indie music, his craft becomes explosive on some tracks, including the beautiful Ghosts and Clear Eyes, amongst others. From this mix of genres and this work result melodies and texts of a rare sensitivity, intimately linked to the artist’s personal history. Finally, he possesses a distinct vocal tone, and a surprisingly pleasant ability to reach high and low tones, both supported by an airy sonic universe, meticulously built.

Rendez-vous at the Point Éphémère

As I arrived at the Point Éphémère, I must admit that I was hugely surprised, seeing people lining up almost an hour before the show. It is not unusual for big artists at bigger-sized venues. Personally, after multiple concerts there, the last one being Mini Mansions, I had never seen this occur here. For those of you who know the place, the line was starting at the beginning of the banks. Which is a huge distance. After chatting quickly with a person there, I understand that SYML is way more famous than I had imagined, thanks to great algorithms on streaming platforms, but also a good visibility given by editors’ playlists. Finally, the opening act announced was Harrison Storm, who I also did not happen to know, but for whom the public seemed very enthusiastic.

Once in the room, it is absolutely full. Apparently, there were only five entries left to be sold before the venue could officially be considered as sold-out! A bear in one hand, my camera in the other, I decide to have a seat on the left side of the room, where it is less crowded. But at the moment Harrison Storm comes out on stage, I notice that it is absolutely impossible for me to move from where I am. A pregnant woman, sitting right next to me, tells me “Too bad if I don’t see, it’ll be like Spotify.” I thus leave and take some distance from the stage, even if it means I’ll see less. Painfully, I make it to the stairs that take me to the balcony, and decide that it is the perfect spot for me to fully enjoy the night.

An opening act and a “polite” audience

The opening act is no other than Harrison Storm, a young Australian artist who has been following SYML on tour. Both share similarities: they are around thirty years old, speak English, sing about personal experiences… But that’s about it. As SYML uses many instruments and vocal effects, Harrison Storm has a way more organic approach. It is thus armed with a guitar, his drums being activated through a pedal, that he opens up to us. 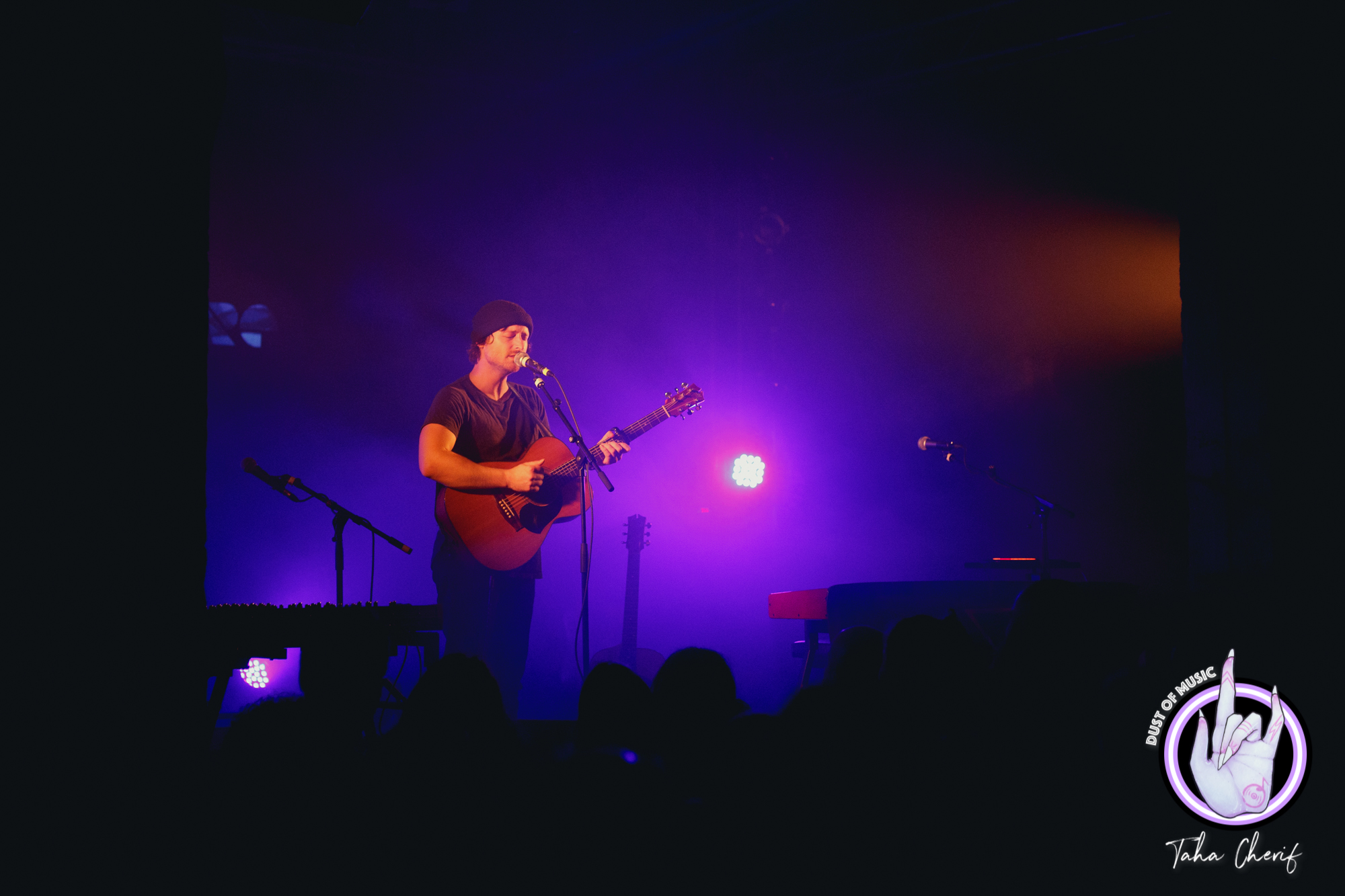 His register is very soft. Tracks follow, and although they are accompanied by drums, the public doesn’t feel like dancing, nor clapping in rhythm or anything else. The rounds of applause are indeed long, but no one is shouting, no one is running wild. Thus, it’s with quite some humour that Harrison judges the situation, as he calls the public a very “polite” one, after which slurs start coming though the air, and the atmosphere becomes all of a sudden way more relaxed. As the set continues, the crowd gets denser and it becomes harder and harder to move through the people. Couples are hugging, people are slowly swaying to the romantic notes, and enjoy the show.

A concert between love and dialogue

SYML‘s arrival is long awaited. The queue in front the venue and the public’s excitation as the lights turned off prove it. With only two keyboards, and as many microphones, on stage, it’s in the middle of a cloud of smoke that SYML makes his entrance, debuting his set with a revisited version of his track WDWGILY [Where Did We Go I Love You], all in electro and reverb. Coming afterward is Rising Upside Down, way darker, and hauntingly beautiful.

Following too is Fear Of The Water, one of the artist’s favourite tracks, whose sole first notes put me into a state of trance. Looking around me, I can confirm this impression: in an almost religious silence, fans are contemplating the singer. And love slowly fills the room. As some mumble the lyrics, others are simply letting themselves go through the motion, dancing to the notes, in an ocean of melodies semi-electronic, semi-organic. 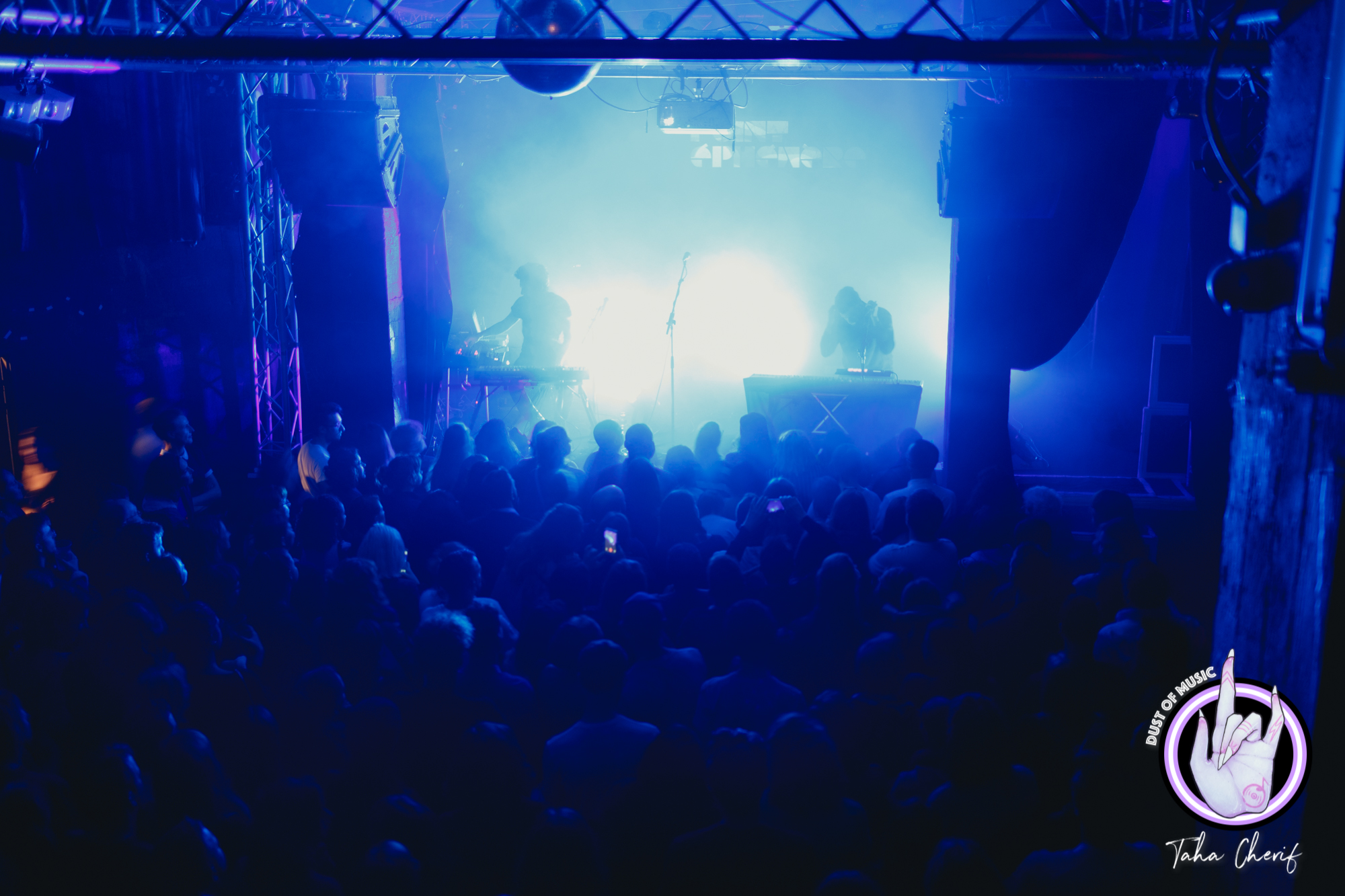 Nonetheless, if he opens up so much through his lyrics, it is certainly not at the expense of his on-stage confessions. He is talkative, and this trait truly helped him break the ice with the public. Brian invited us all to ask him all kinds of questions. The first ones are quite unsurprising, almost cheesy. But the public, as much as the singer did, gets more comfortable and starts expressing itself. From wine to cheese, including tours, taste and future, everything gets asked. Even Britney got asked about! (I did it, to be honest). But it’s foremost his honesty and humour who helped us getting in touch with him. He also confessed writing Girl to his daughter, who has been underwent heavy surgery, and whose love and strength inspired him.

Supported by a scenography rich in terms of colours and effects,  the message that the singers conveys is as pure as his voice is. He seamlessly alternates between the keyboard, his guitar and microphone. Showcasing a rich and diverse discography, the genres he performs are all tweaked so the tracks can follow one another without any real cut. It truly feels like we’re diving into a sonic bubble where sounds lift us through a trip that lasts a little less than an hour and a half, that reaches its end with the singles Clean Eyes, Ghosts, one of my favourites, Mr. Sandman, a cover of Chordettes, and finally Where’s My Love. 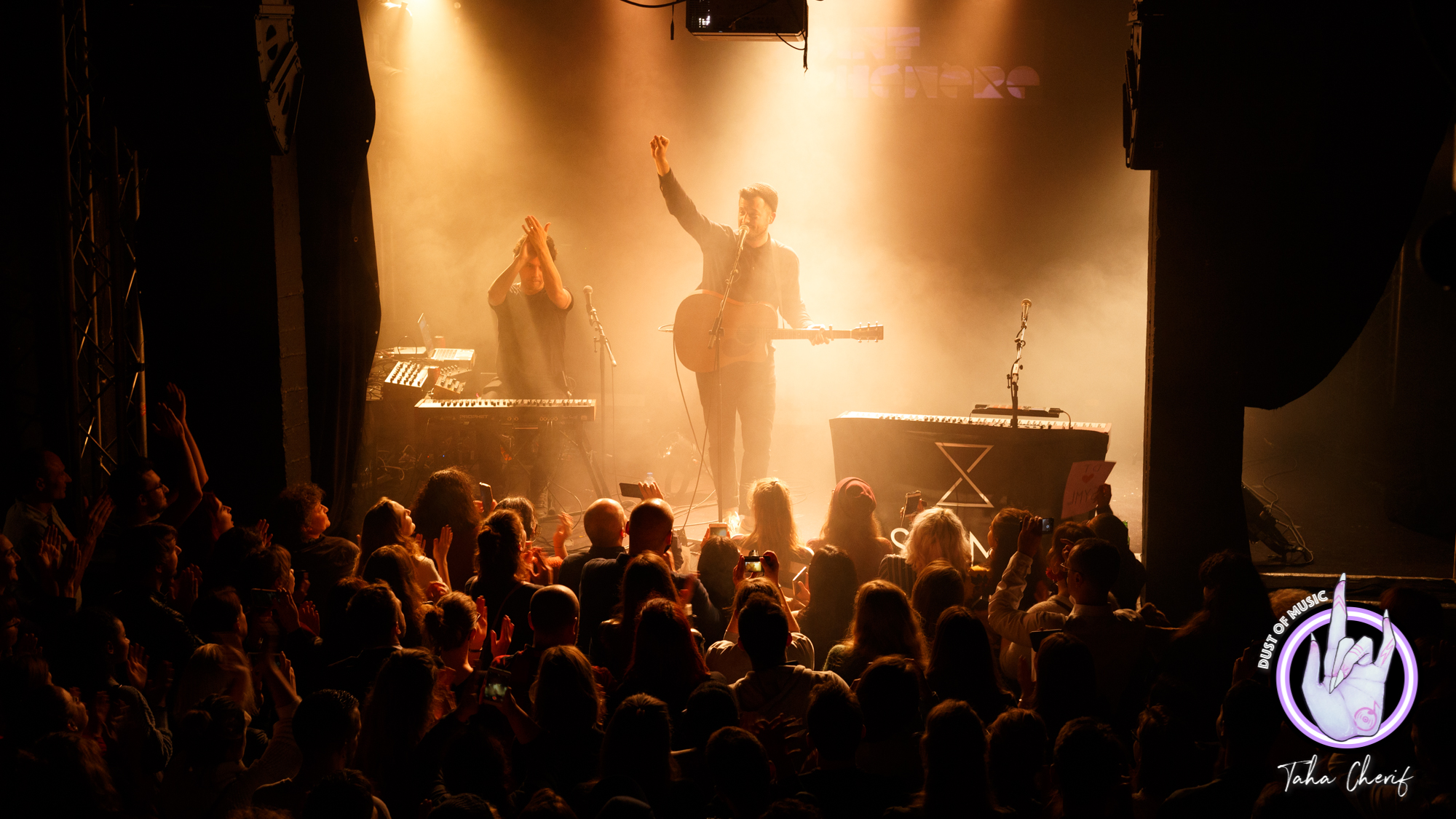 If you still don’t know about his universe, I can only encourage you to listen to his last EP, In My Body, as I consider it to be truly representative of this artist’s craft, exploring genres and effects.