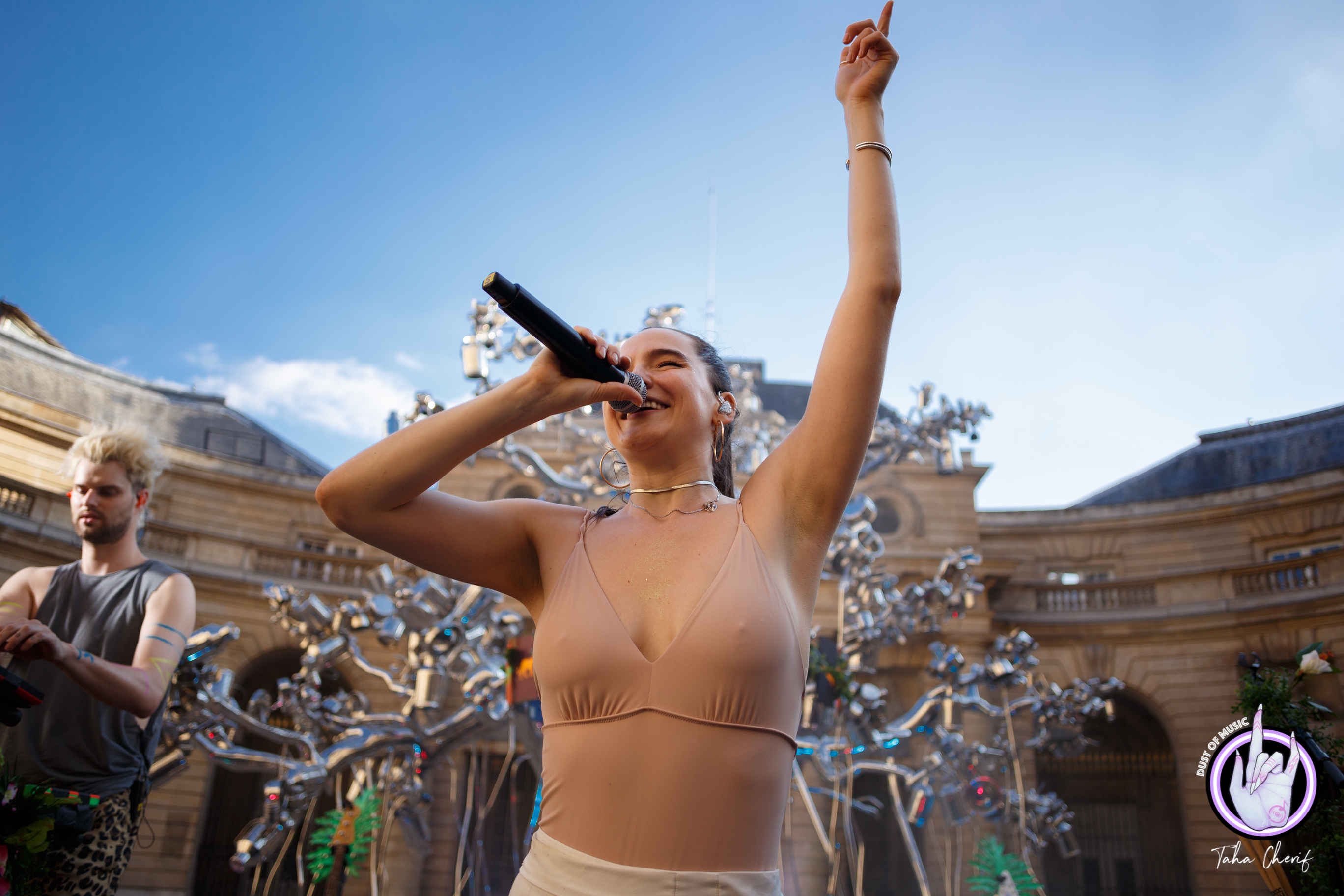 If you have been following us, you probably have read about Sofi Tukker. After releasing an explosive first album, called Treehouse, the New-Yorker duo was back in the City of Lights to promote it. An explosive concert, just as they are.

You know how much I love Sofi Tukker. Two young New-Yorkers who, after graduating, started a career in music. The first, Sophie, sings and plays the guitar, while the second, Tucker, is more focused on the keyboard and drums. The first aspired to be a songstress, poetess, as the second was seeing himself as a DJ. After numerous EPs, collaborations with different DJs and repeated efforts, here they are. Their identity, combined with their distinctive sound, aren’t any strangers to their achievements.

The duo’s style has always been extravagant: an explosive palette of colours, an extraordinary stage presence, an overwhelmingly positive atmosphere, all supporting a music filled with heavy bass and exotic notes. Coating it all, light lyrics, inspired by poems, although sincere, right out of their guts. Finally, if you were to know one of their tracks, it would probably be Best Friend, which served in one of Apple’s ads. Their career has truly benefited from this boost, and here they are, playing on the big scene.

For this concert, we were expected to be at the Monnaie de Paris. It’s the middle of the summer, right next to the Seine, in a historical building, more renown for its rare collections rather than the concerts taking place there. In the main yard has been installed a great sculpture, incredibly bright, in front of which the stage has been installed. The tone is set. The space is filled with light pop tracks straight from the 2000s, including some iconic Kylie Minogue songs. Sophie and Tucker are both wandering, slowly enjoying the spectacle that the building offers, wave at us and seem joyful. But the tour gave them unfortunately very little time.

The stage in itself is quite the usual one we see at a Sofi Tukker concert, adorned with flowers, plants and decorative elements belonging in an imaginary electro jungle. And for this show, there is no opening act. The show will be held facing an audience that will be at best intrigued, and that will not have had any other distraction than having a drink, be it a cup of juice, or a beer. As it is a press even, a major part of the audience seems to be curious, even novice. The challenge will surely be more complex than it would be at their own previous concerts.

I had already told you about Treehouse a few weeks ago, when it was officially released. It truly is a favourite, that won us over at Dust of Music. Indeed, Jennifer, Emma and I fell in love with this group, for one major reason: their music is positive. Whatever might your mood be, place or situation, Treehouse provides a variety of musics and rhythms that will inspire and uplift you. The album counts only ten tracks, each and every one being worth your attention, a live rendition being even better. Sofi Tukker confided during an interview given to us: they envision their music as an experience that also has to be lived, through which they can transfer their energy to the audience. 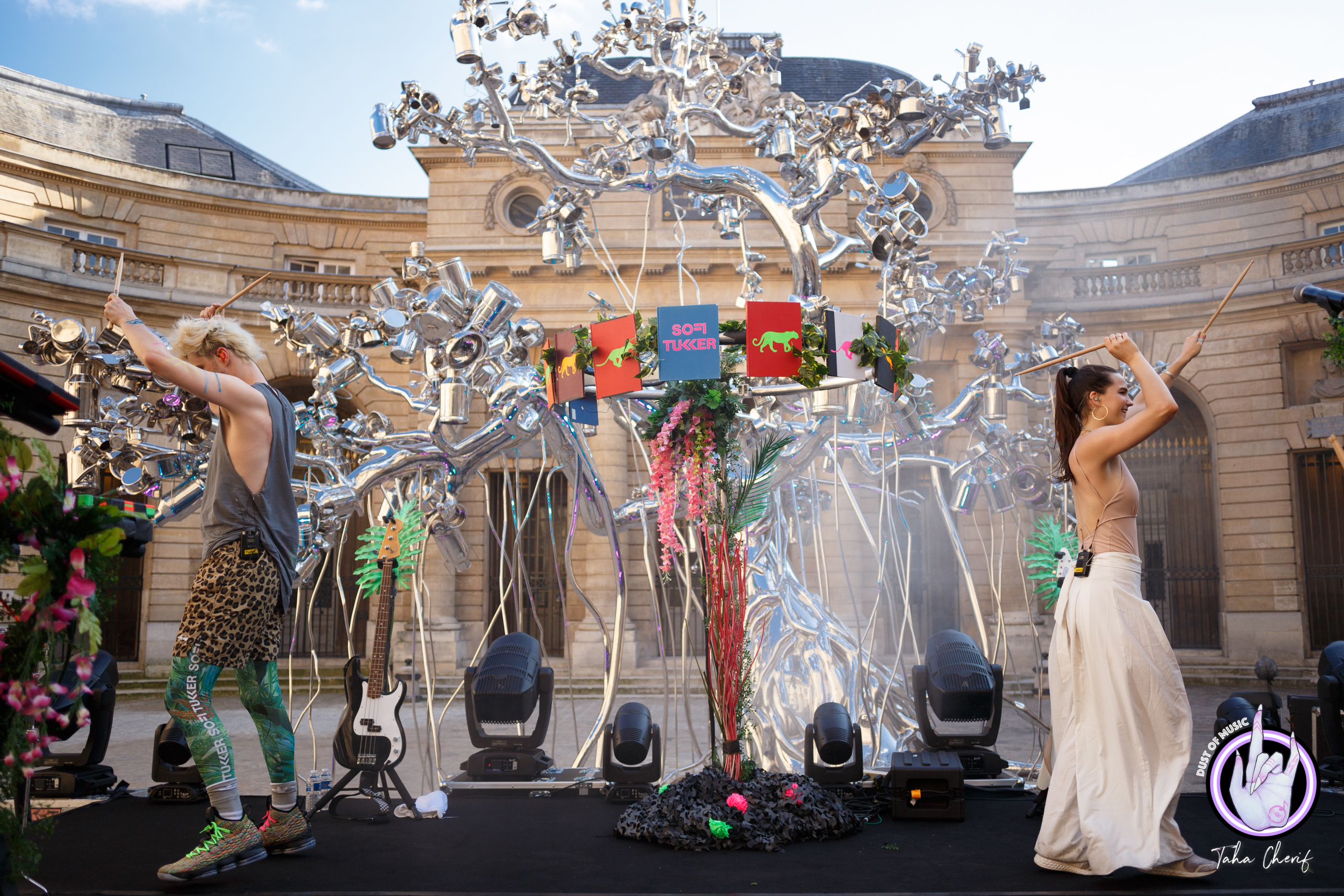 As they arrive on stage, the thermometer displays more than 28°C. It’s about to be a hot gig! After an introduction, getting the group a little round of applause, the two artists officially start the show, which will last a little over an hour and a half. Thus, opening the concert with their track Energia, the public finally gets into it and starts swaying slowly. One has to admit, the duo does not give us any pause: they are playing track after track, some from Treehouse, some from their previous EP Soft Animals. Interaction is at the heart of their modus operandi. After displaying a couple of moves, they lead the way and make the public reproduce the Awoo choreography, which is simple, although efficient, before they get into the crowd for some more direct interaction.

Sofi Tukker, an experience to live

It is hard for me to describe the state in which Sofi Tukker drives their crowds, without using superlatives. Balancing between euphoria, uplifting beats and messages of acceptance, the tracks the duo play are all different one from another. While Sophie is having a blast in the crowd, and is dancing with a fan, the first notes of their track Fuck They start filling our ears. The crowd is ecstatic. After which they slow things a bit down. Indeed, Sophie, a committed feminist, has written the following track, Baby I’m A Queen, with a simple goal. Make women have confidence in themselves again, and empower people.

The duo leaves no time to rest between tracks, and draws the crowd into an excitement that is rarely seen as the first notes of Best Friend escape from the speakers. It is indeed one of their most famous tracks, known by the general public thanks to an ad with Apple. Tucker even takes the time to give the mic to the crowd, who’s singing their heart out, as Sophie is still dancing and enjoying a moment that seems to be timeless. Finally, Drinkee, an ultra positive and festive tracks, announces the end of the concert. It is exhausted but filled with adrenaline that the two artists leave the stage under a huge round of applause. Fortunately, they’re available for a last picture, right next to the stage, be it with long-time fans or more recent ones. 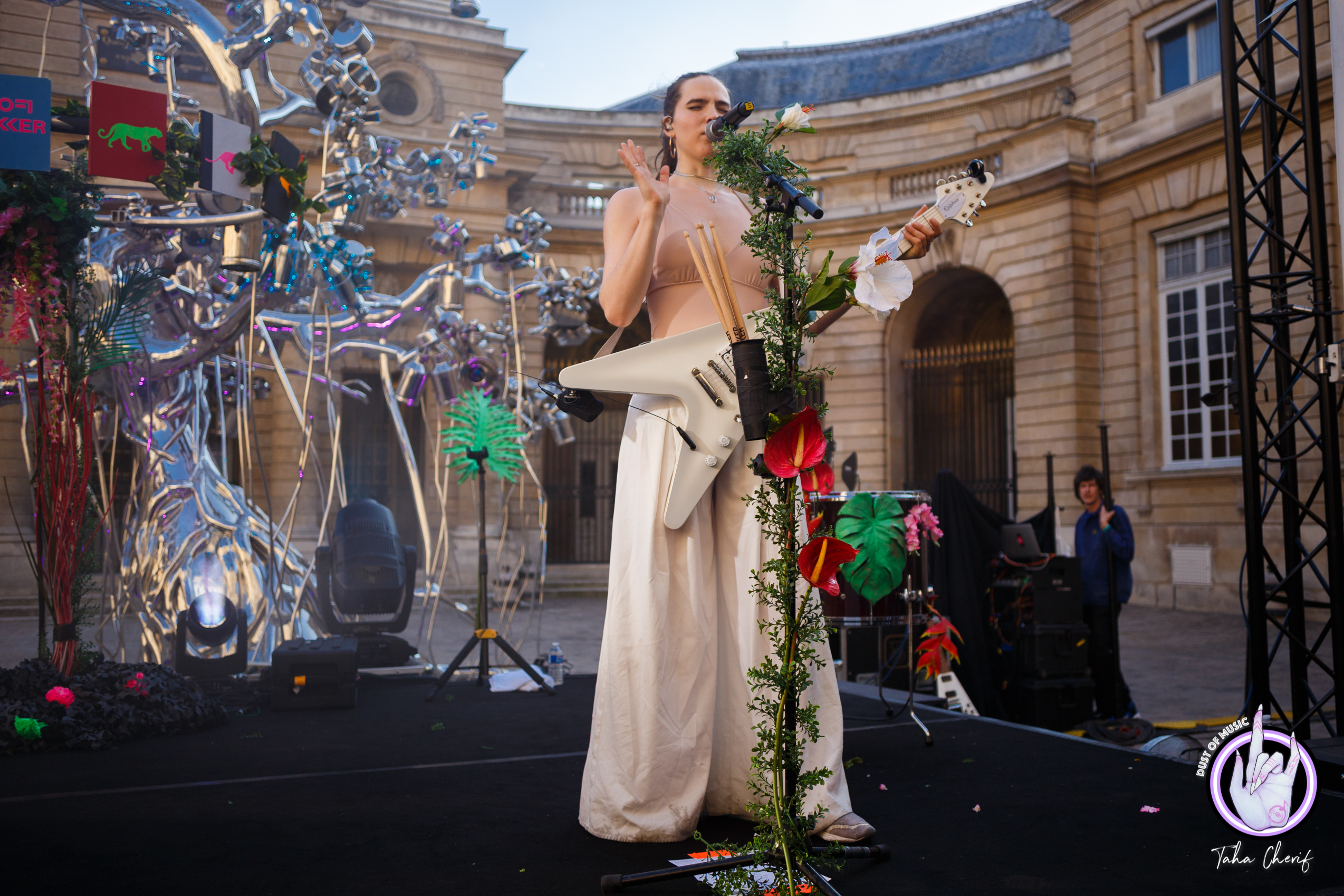 Personally, it is a real pleasure seeing them live every time. Their positivity, joy and energy are truly inspiring. From the Pop-Up du Label, where we barely were 50 people, to the Maroquinerie where it was four times that crowd, to the Monnaie de Paris, I really can not wait to see them on September 19th at the Cabaret Sauvage.