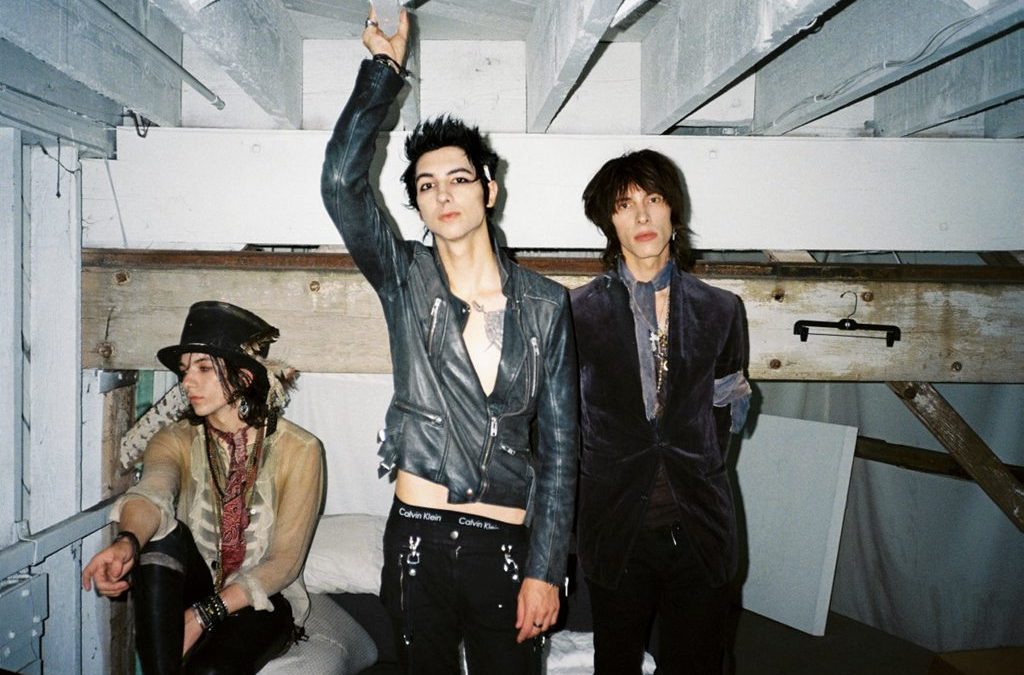 You are cordially invited to the court of the Palaye Royale.4 min de lecture

Another week, another discovery on Dust of Music ! Today, I talk to you bout an American rock band that I follow since several years now and that you need listen to listen right away : Palaye Royale.

In the Royale family, I want the brother, the brother…and again the brother. Behind this atypical band, are hiding siblings :  Sebastian Danzig, the oldest one who plays the guitar, Remington Leith, who’s taking care of the mic and Emerson Barrett who suits himself behind the drums. All three are constituting an original and independent band who mix different arts to create their own universe. However, they are not new in music and have another musical history before Palaye Royale!

Another name, another story

Before this royale adventure, the band was named Kropp Circle, Kropp making reference to the brothers’ last name. Created in 2008, the band has been noticed through covers posted on Youtube but also original tunes very promising for their young age. At the time, the band gathered 11 million people on their MySpace page and has been nominated in several musical ceremonies such as People’s Choice Awards in Rock and Pop categories. It’s in 2011 tht the name of the band turned into Palaye Royale and open a new page for the siblings. Today there is a few Kropp Circle videos left on Youtube but you can see below one of their old tunes, Can’t Stop The Rain :

As mentionned earlier, one of Palaye Royale‘s features lies in the certain aestheticism of their dress style. Refined, vintage and goth, the group has created a unique image and it is not for nothing that the group calls itself a “fashion art band” (note: there is no translation official nevertheless it means a group adept of a fashion). The musicians have a strong connection to fashion and have performed at fashion shows and more recently at a designer rally during Los Angeles’ Fashion Week last month : Palaye Royale is band with several facets and we can add after art and fashion, cinema! In effective, the singer of the band led his voice in the movie American Satan for the character Johnny Faust, played by Andy Black, Black Veil Brides‘ leader. The movie tells the story of young British and American stufents who have a band and decide to give up on their studies to follow their dram on Sunset Strip (Los Angeles). Palaye Royale wrote several tunes in the faustian thriller’s sountrack released in October. It reveiced a global grade of 6,5/10 on IMDb (ndlr : American version of our Allo Ciné) and if you wanna more about it, you can read our review here. You can also for now watch the trailer below :

Here’s another single from the movie, Let Him Burn, written by  Palaye Royale and performed by Remington Leith:

Behind everyt band and artist are hiding thousands of fans. Palaye Royale is a band that evolves and gathers plenty of fans worldwide. The musicians are very close to their fans on Twitter namely where they use to discuss and share a lot. A certain closeness that isn’t restrained with their recent contract with American label Sumerian Records. Furthermore, thanks to their fans called Soldiers of The Royal Council, the band won MTV’s Musical March Madness in 2014, after winning against Tokio Hotel, another band that kinda inspired PR but also champions from 2012’s edition of the contest.

After two great singles Get Higher and Morning Light (21 million views on Youtube), an EP and a debute record released in 2016 called Boom Boom Room (Side A) whom second part Boom Boom Room (Side B) will be out next year, Palaye Royale is an accomplished band that is surely marking American rock music sphere. Nevertheless, their new objective is to export their music towards new countries. We can’t wait for them to come around! UPDATE :  And hell yes it’s happening, the band is coming in Europe this Autumn for a tour! They will stop by our French capital at Supersonic on September 27th and you MUST go see and check them out! Their energy and passion on stage will blow your mind.