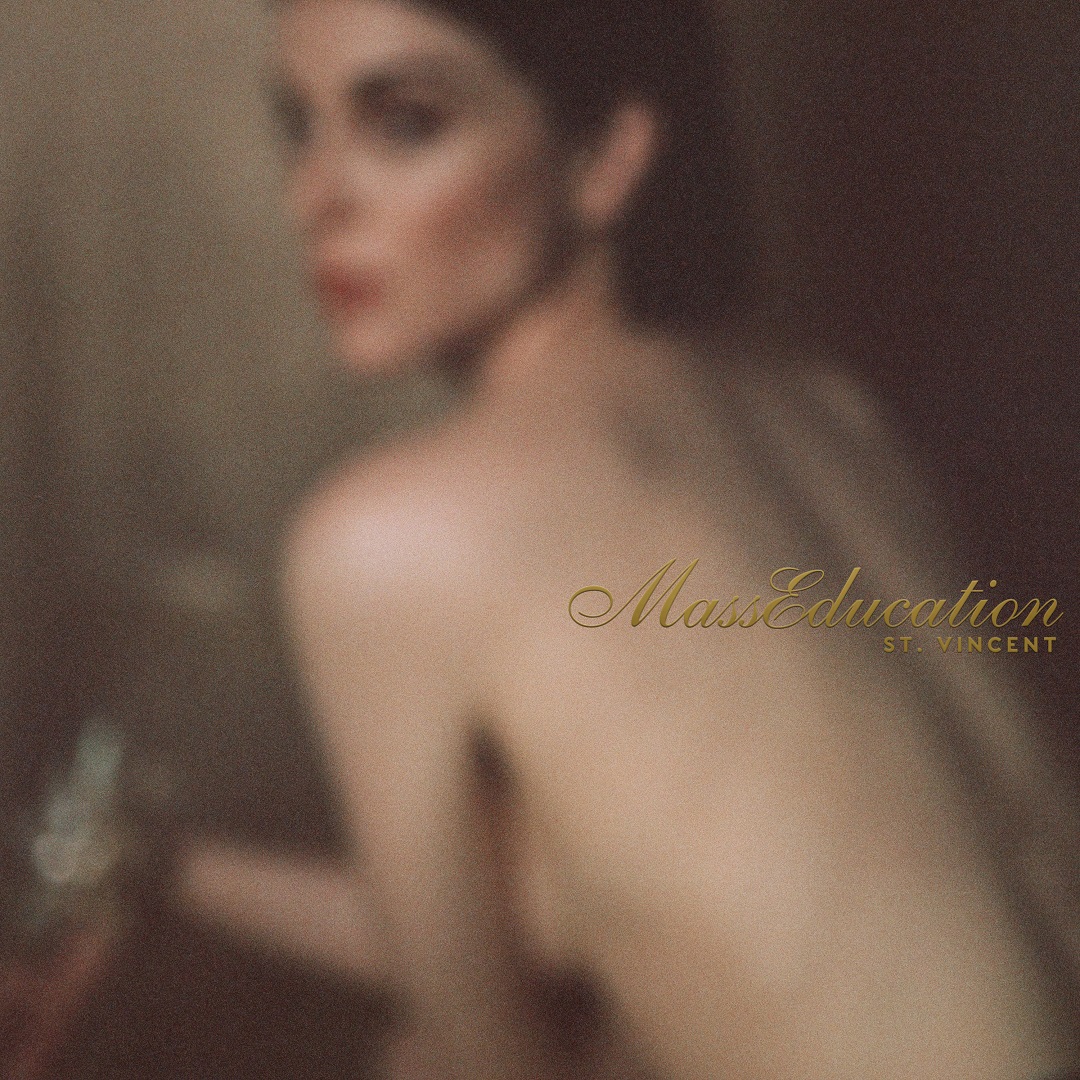 St. Vincent had already won our love last year with her album Masseduction. It was indeed rich in personality, colours and music, which had granted it a place on our shelves. Today, the artist is releasing a revamped version of her album, MassEducation. How does it compare, and how does it stand on its own?

Masseduction, the bar is already high

One has to admit that St. Vincent is an artist with multiple facets. Indeed, after releasing her album Masseduction, she had continued, as she usually does, with releasing video clips that were visually interesting, rich in terms of details, and that offered multiple interpretations. After she had revealed a few months ago a reworked version of her track Slow Disco, called Fast Slow Disco, I started to wonder where this was going. But today, it is in a more laid-back, raw and organic way that she has decided to reveal herself. Thus, she offers a new version of her music, that was sometimes hidden under multiple layers of vocal and sound effects. An homage to her own poetry?

The production on her Masseduction album seemed to be actually conceived to be supported by multiple instruments, choirs and a sound spatialisation at the middle of which would Annie Clark’s voice find itself. Regarding the quality of the opus, its production, but mostly her voice’s quality are still undeniably strong. Finally, the album in itself hasn’t aged, as its style is so specific, and different from the current pop/rock waves overflowing the market. The bar was set high.

I must admit that I don’t follow Annie Clark’s new stuff that closely. But when she released her new track Slow Slow Disco, I could not help but smile. I was eventually curious about what this new album had in store, and in what direction it was going. Some artists brilliantly succeed in giving a new life to some of their material, and turn concerts into their advantage to rework some of their craft. It is also with a kind and open ear that I start playing this album, that lasts 45 minutes. My only companions here are Annie Clark and his pianist Thomas Bartlett.

Her delicate, light, but also sometimes strong voice hasn’t left. St. Vincent has decided to open her new album on Slow Disco, with a shortened name. A delicious introduction, followed by Savior, way more crude in its imagery. I must confide, I was a but surprised, and found myself ending suspicious. The vocal performances are absolutely superb, her voice floats seamlessly in the highest registers, the work is pure. Her voice resonates, strong and confident, while the piano supports justly these angelic vocalises.

As I mentioned, the texts have been left untouched compared to Masseduction‘s original version. When comes the eponymous track, I still feel mixed. The musical and vocal performances fit perfectly this narrative of a pure rework, and I start a process of self-questioning. Would I be unwillingly close-minded? The bridges seem that they have, indeed, been conceived to work with a pop production, including repeated words again and again, that might feel this time inadequate for this genre.

Nonetheless, I truly want to insist on the exceptional work both artists provided, either Thomas Bartlett and Annie Clark, on this album. The piano is incredible. Sugarboy conquered me entierly, and I start dreaming about a live performance of this piano version. St. Vincent really succeeded in revamping this track, to my greatest pleasure, while to my opinion the chorus could have been removed, to let the piano truly express itself.

In the same way as the previous track, Fear The Future is a true masterpiece. I have indeed played the track multiple times before even considering hearing the next one. From the sound spatialization to Annie’s voice, including her voice range and the piano, I feel that the track lasts way too little. Smoking Section, on which the artist proved her creativity and played with her voice, won me over too, although it differs very little from what she had delivered on her original record.

Los Ageless follows too, and is one of my favourite St. Vincent tracks ever, all albums included. Hence my great expectations as I play the track. And what a delightful surprise. Exceeding all my wishes, I am both surprised and happy seeing how changed the track is, supported by an unexpected vocal performance, and a perfect harmony between the two artists. New-York joins the list, and provides a new sight on this track, as tender and loving as ever.

This album was also for the artist an exploration of genres, around material that evolves. Young Lover regains here all the sensitivity that composes its lyrics. St. Vincent succeeds at giving it back all its poetry that, in the commercial version, lost some of its lyrical impact to the surrounding music. Regarding Happy Birthday Johnny, it does not change one iota.The songstress performed it live without any other support than her voice, where she has here a piano that compliments her talents.

Pills seems to unfortunately join the Masseduction track, with texts that might be sometimes too repetitive, but that would other fit perfectly a pop register. Though, Annie’s will and commitment to the project is honourable, and she more than deserves to be lauded for going through this balancing act. Fortunately, the vocal and musical performances make up for it and cover some of the otherwise lacks there could be.

Finally, Hang On Me encompasses, finally, all the beauty there is in this project. Also, it clearly sweeps all the preconceived ideas one could have before playing the album. St. Vincent has tried to provide a new version of her craft. And she successfully handled it, although some tracks might have needed some lyrical reworking. I must admit that I didn’t know what to expect, but I have been very pleasantly surprised. The artist delivered a powerful album, strikingly soft and vulnerable, that efficiently revisits in an unexpected way her tracks. For some calm and cosy moments, sitting next to a fire, under a cover.