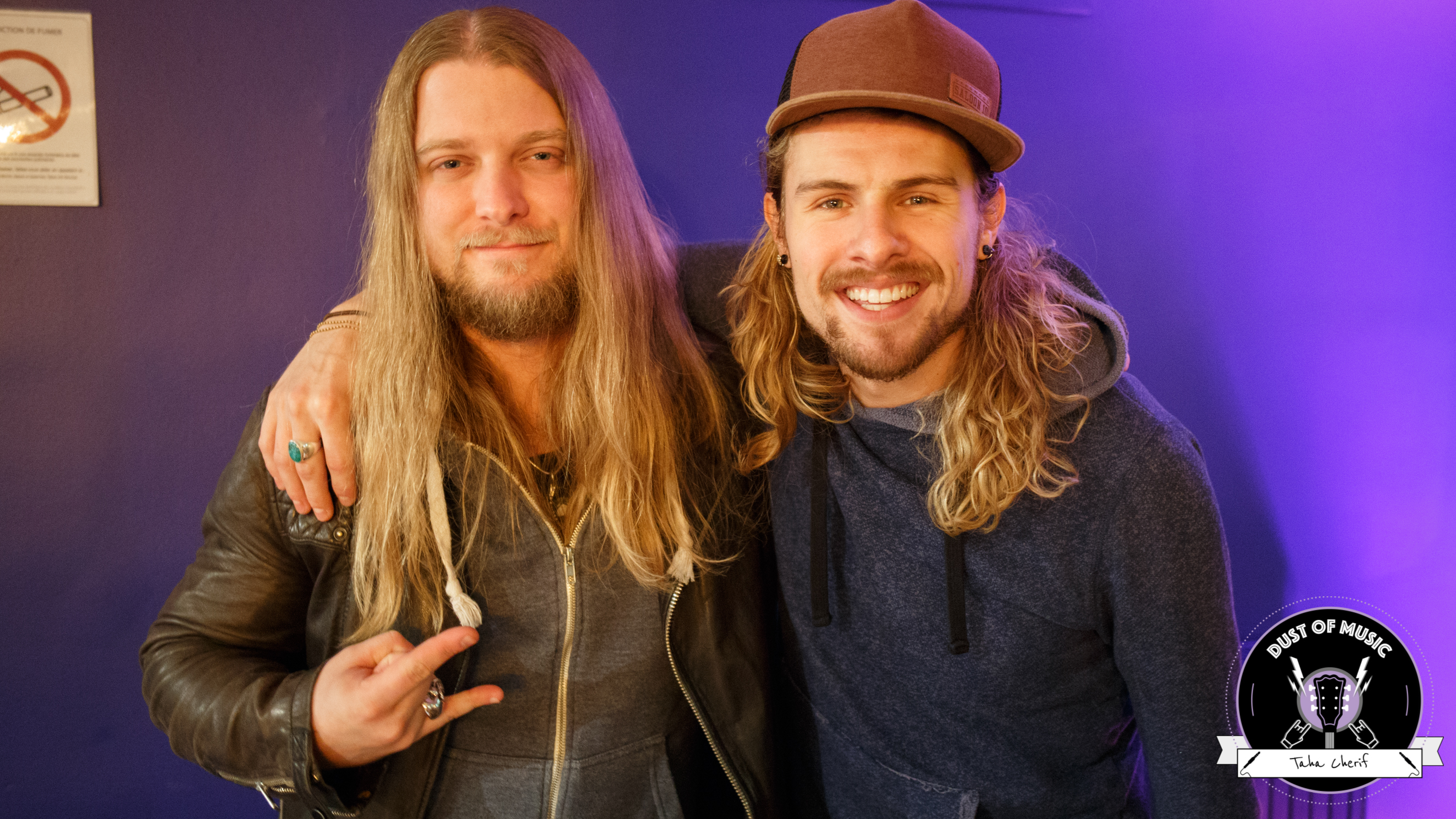 Tyler Bryant and the Shakedown is a group we recently mentionned, when Emma wrote an article about them. Currently touring, they stopped at the Maroquinerie at the end of November. The perfect occasion for us to have a little talk with them, and ask some questions.

As I arrive at the Maroquinerie, the night is already dark. There is not much people inside, and it is normal. The restaurant-bar opens only once the main doors open for the concert. Although it is cold, people are already queuing. This Parisian stop has attracted a lot of people, as Tyler Bryant & The Shakedown is a group on the rise. They have indeed opened for big rock groups, and their shows have all been critically acclaimed. In Prague, TBTS had delivered an incredible concert. With their new album released, we could not wait to get to know more about this phenomena.

Inside, I am about to meet Caleb, drummer of the group, and Noah, the bassist. Both seem extremely enthusiastic, and seem glad to give interviews. It certainly does look like they are used to this: surrounded by speakers and hard rock music, they could as well be at home. Caleb kept his hat one: blue, it suits his look. Noah, on the other hand, chose a beer as an accessory. It suits him as well, and I envy him; the bar was only available for the artists, at the time we made the interview. At the table, we chat a little, as the two Americans take, laughing, the sheets of paper and pencils I laid in front of them. 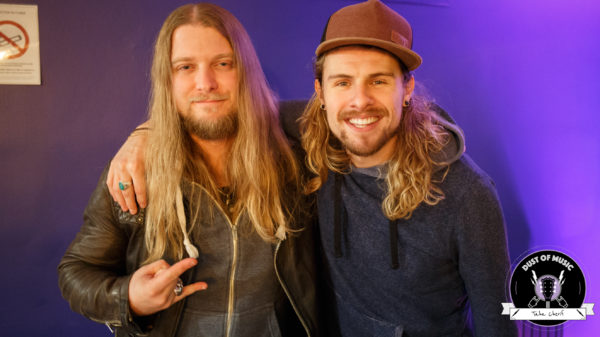 Taha: Congratulations, guys, you have just released a new album that we loved, at Dust of Music! And the previous one is already three years old! How did you organised your writing sessions, and the whole creative process?

Caleb: Yes, and it’s almost turning four! Actually, there is no methodology. It goes in any direction, sometimes Tyler comes up with a title, a riff, Noah finds one, or even I, whatever. We let our creativity roam freely. We’re constantly creating, either as a group, or separately, and we put all these things together to give life to a track. For this album, we really wanted to focus on what characterised us, and make an album out of it: good old school rock’n’roll. And the time had come to do it, it represented a lot to us.

Noah is bending over his piece of paper, drawing what looks like clouds. He confirms what Caleb is saying.

Taha: You opened for some of the greatest rock bands. Your last prodigy was in Paris, at the Stade de France, when you opened for Guns N’ Roses. It is a huge accomplishment, for a group! How do you feel, regarding this, and what do you feel when you go back to more intimate, closer to the public, venues ?

Caleb & Noah, together: It was awesome! There were more than sixty-eight thousand people there. It is probably the biggest stadium of the tour. [Noah  goes back to drawing, while Caleb continues talking.] We had to learn how to perform and deal with such shows. To alternate between stadiums and clubs is an excellent exercise: you learn how to transpose what you learn and do in a stadium. It’s about bottling this energy up, and pouring it out in a club

I’m going to tell you something: last night, we were in Utrecht, in the Netherlands, and at the end of the show some fans came to tell us they felt like they were in a stadium, in a club. It truly wars your heart, when people attest that you can indeed do what you want to do. Our main goal is to produce the same show, be it in front of 80 000 people, or 80.

And then,  it’s an excellent exercise because one time you have a crowd that isn’t coming for you, and then the other time a crowd that belongs to you, in a way. The challenge is to convince the crowds who are coming for another group. We equally love these two kinds of crowds, but starting our own tour is so gratifying. After 16 month of tour, it is a delight to find a crowd that we can call our own.

Taha: You make a distinction between the people you consider being your own crowd, and those who aren’t. Your music has classic rock influences, and it is exactly the genre you await when you attend a Guns N’ Roses concert. How does that crowd react to your material?

Noah: This case is almost typical for us, and we try to convince them: the first rows are often very receptive.They can see you, and start jamming quickly. And on a one-hour-long show, we try to play and reach equally the people at the front rows and those at the end of the venue. We try to engage with every one: it doesn’t matter if they want to see us or not, we’re here, so we’re going to play. And our goal is that when they leave the concert, they remember us.

Taha: About the critics this time, what is their reaction towards your stuff? Have you had any feedbacks?

Caleb & Noah: The overwhelming majority of the reactions and critics have been extremely positive. Each one of our albums is supposed to represent progress, in the way we play, sing, and behave as a group.

Then, the reactions from crowds who weren’t so to say ours were also positive since the beginning. We currently do a Meet & Greet VIP, and the majority of the people who took part of it have known us after Guns N’ Roses or ACDC concerts. It is very gratifying, and when you see such reactions, it’s as positive as critics.

Taha: Could you tell us the story of your group?

Caleb: Tyler and I met in 2009. We were a trio, and wanted to have an extra guitartist. In New-York, we met Graham and convinced him to come and settle in Nashville, and to become part of the band. Two years later, our bassist left us.

Noah and I had known each other beffore that, as we went to the university together. Noah is a learned bassist, and we had a lot of classes in common. He had heard that we were auditioning, so he contacted me. After the classes, he took some lessons. After we auditioned him, it seemed clear to every one that he had to be part of the adventure. Noah really gave a new energy to the demos that were on standby, and transformed them into really hard-hitting tracks.

Noah: I brought a lot of rage, you mean!

Taha: To bring all these new energies into unison, satisfy the public and create new tracks, who were your influences?

Caleb & Noah: Our influences have clearly been the groups with whom we’ve been on tour. We’ve paid attention to each detail of these groups. Their transitions, their choruses, and obviously their songs. We asked ourselves “What’s making the crowds react?” and we tried to learn from them on a daily basis. And every day, we would adjust our processes, we would want to make 80 000 people sing our choruses, while their fists would rise. We reworked a lot of songs after those concerts, before putting them on albums.

Our spectrum of influences is also representative of what our life was at that time: we tried to bring to life all these experiences. We were very implicated, and we wrote four songs in five days. Some days, obviously, we had nothing, but at least we knew what we wanted and where we were going.

Taha: Your work is also conveyed by its visual aspect. Noah, you drew the hand that is on your previous album, isn’t it?

Noah: I would dare say “drawn“, it’s more that I contoured my hand. But it’s on the CD, which is very cool. We like not to be stressed about everything and be cool.

Taha: For how long have you been in Paris? Your tour has some crazy pace!

Caleb: Clearly, it’s heavy on us! We arrived in Paris a few hours earlier only, and haven’t had much time to wander around. But it’s not that we don’t want to! One of the hardest moments we’ve had was after a concert at the Royal Albert Hall in London. We had to be the day after at 9 in Paris. The moment we woke up, we had to do many interviews, we were starving and didn’t even know where we were any more. When our manager came in with our breakfast in a bag, trust me, this croissant and espresso saved my life.

Taha: And how do you feel, regarding these interviews? How does it feel like, having to give them?

Noah: It’s actually way more pleasant now.We have an album out, which gives the interviewers things to discuss. Before that, every interview that we gave was about answering the same questions over and over: when is the album out? What do you have in stock? In which direction do you think you will go? It wasn’t that concrete last year. We feel like repeating ourselves, and almost being judged: why not earlier? This time, we have concrete answers to bring, and we are flattered that the press still wants to see us! We love it!

tbtstyler bryant and the shakedown
0
FacebookTwitterEmail