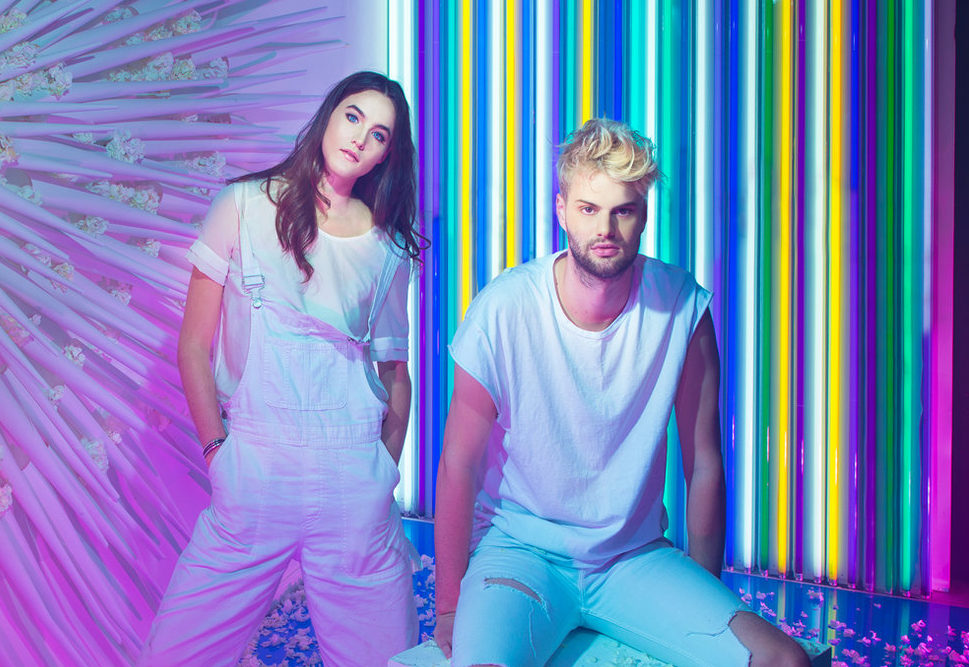 Interview with Sofi Tukker: it’s all about adrenaline and passion8 min de lecture

Sofi Tukker are currently touring and a promoting their music across Europe, and profits an ever-growing popularity. While they stopped in Paris for a couple of days, we had the pleasure of meeting them. We talked about passion, music, meeting new people, but also private life and the future.

Our appointment is set in the middle of the 9th district in Paris, near the beautiful Notre-Dame-de-Lorette church. The sun is shining, the streets are calm. On a Friday afternoon, I’m wandering, and I have a lot of questions running in my head. I had told you about this group in an article published earlier this year, and seeing how far they have come is truly overwhelming.

As I arrive, Sophie and Tucker are leaning on their elbows. Both seem tired, and are accompanied by their manager, who has been on the road with them. After being on the road across Europe and the United States, their stay in Paris is unsurprisingly enough short: they arrived the night before, and are leaving on the same evening. We chat a little, about their last gig in Paris. The memory is not exactly happy, as it was on the night of American president Donald Trump’s election, and the two artists were teary-eyed as they evoked the situation in their country, at the Pop-Up du Label. Here’s our discussion.

Taha: You have just released some new material, between November and today, including Energia and Bestfriend, which got huge exposure thanks to Apple’s iPhone ad. [Note: it’s been since released on their new album Treehouse]. The road has been quite long, from performing in small venues to huge festivals. How do you feel regarding this progression?

Taha: Congratulations! You’ve also had the opportunity to appear on shows such as Jimmy Kimmel, which is huge in the United States. It’s huge, and proves your interest for the public in your music. What was your mindset when you started making music, and did you expect such a gain in popularity?

Sophie: I think we believe in ourselves. But I also think that we had no idea what we were in for, and what was possible. So we were just doing music that we liked.

Tucker: I think we thought we had something special to offer to the public, and that is why we went for it, and took the risk after we graduated. But we also didn’t imagine a lot of the things that happened happening. A lot of stuff has been both exciting and shocking, but we’re altogether grateful for the experience we’ve had.

Taha: Do you think you could go back to a normal lifestyle now that you have gotten used to travelling, and having this much fun?

Sophie: I think that would be a hard transition, because we have gotten so used to it. I hope it doesn’t happen, because I want to keep making music and touring as much as possible. I think we also are happy and resilient people, so who knows.

Tucker: I haven’t even considered it, so I don’t plan on it stopping! [Laughs] We will be fine. We will both be ok, if for some reason we couldn’t do this any more, but I think we are really finding a calling of performing and connecting with people. Bringing a vibe and energy to places and to people feels more impactful than I could imagine myself doing at a normal job, and I am hopefully continuing to do so.

Taha: Your music is very positive. Do you want to bring this energy to your listeners solely by listening to your music, or do you consider your performances and music as a whole ensemble?

Sophie: I think you’ve got it. Our music is just part of the thing. We’re most inspired by making music, but the energy we are passionate about, that we love conveying to other people, is something that hopefully comes across in every part of our craft. We love life, and we love seeing people come into this state of mind.

Taha: It truly does come across at your shows! I guess you are getting the question over and over, but do you plan on releasing an album?

Tucker: I’m not sure if we’re allowed to say anything. We are planning on releasing a lot of new music. We want to say it, there is a big thing coming out and it will be announced very soon, and we have a ton of music and videos finished that we can not wait to put out.

Taha: Talking about videos, the Fuck They one was very fun to watch, I guess it was fun to shoot too? How did you come up with the ideas?

Sophie: That was the most fun! For that one, it was actually late one night, we were laughing so much and coming up with ideas, what if we threw cups and each others, had leashes around our necks, just wearing weird things, jumping and running… So we went up to the director, explained it all, and they were up for it! And he made it even better!

Taha: When writing, where do you draw your inspiration from? Do you write lyrics first, do you write on top of the rhythms?

Tucker: We’re both in a room together, just creating. Whether it starts with a poem that Sophie is reading, or words that she had written, or drums or a bassline that I make, we will run with something that we both love. Every song comes off differently, but is both of us being there and getting really excited.

Taha: Are these creative sessions spontaneous, or are they scheduled?

Sophie: It’s a continuous process, actually. We have a lot of things that will probably never be released, but we still do it because we love it.

Taha: Are you planning on working here, visiting, neither or both?

Sophie: Work, no! And I’m not sure we’ll be able to visit the city either. I’ve been here a couple of times, years ago. I was very excited about eating persimmon… Khaki fruit. Because we don’t have them in New-York. I really do love them. I am inspired by the wardrobes, because while watching people on the streets I always spot items that I love.

Tucker: Everybody looks so good in Paris.

Taha: How would you tell your grand-kids about your career? And what accomplishments are you particularly proud of?

Sophie: I am proud of what we have done. And I want to improve myself. There’s no limit to how good one can become. And wow… Grand-kids. I think I will have reached my highest potential by the age of 65.

Tucker: That is what she always says! She can’t wait to be an elderly person, with greyish hair. [Talking to Sophie] You will do a great grand-mother, with a superb physical condition, doing yoga regularly.

Sophie: I really cannot wait to have grey hair. 65 will be my perfect age, and I’m preserving myself now to be an amazing 65-year-old woman.

Taha: What do you do, in order to disconnect, when you feel that there is too much going on around you?

Sophie: Great question… You know, I feel easily overwhelmed. Because I am so fucking sensitive. I go back into my cocoon, and dissociate. I meditate, do some yoga, exercise, read, do respiratory exercises, listen to music… Sometimes, when I forget to do these things, I don’t feel that well.

Tucker: I have a radically different sensitivity. I don’t feel the need to dissociate, because I love what we do so much. [Sophie screams “I love what we do too!”] When we have free time, we do some music, and we love that. I think that this is what allows me to resource myself, stay creative, and focus on the right energies that I need. I love playing basketball, or even watching it. It relaxes me a lot.

Taha: I’d like to conclude with something different from what you must be used to, and hear over and over. And for this, I’d have a request: ask one another a question that you have never been asked.

[Both are surprised. They will confide later on that they know everything about one another, but that they couldn’t remember well what had already been asked in interviews, and where they knew some information from.]

Tucker, to Sophie: What is the biggest fear you have, regarding the pace of life we now have?

Sophie: I think the greatest fear I have developed regards our health. Constantly messing up your sleep cycle really is heavy on the body. I think I do everything I can to get some relief, but we’re not being easy on ourselves. Between the nights on the bus, on the plane, constantly changing our rhythm isn’t excellent for the body. And then there’s the adrenaline.

Tucker: Honestly, it’s even more difficult to do without the adrenaline of the tour. We’re used to feeling it every night, so at night we fall asleep super quickly. On the other hand, it’s way more difficult without.

Sophie, to Tucker: What do you think about my drawing?

Leaving them, I feel good. These two young New-Yorkers have already accomplished so much, are living their dream, and have a long career ahead of them. They recently released a new mixtape. You can follow them on Twitter.