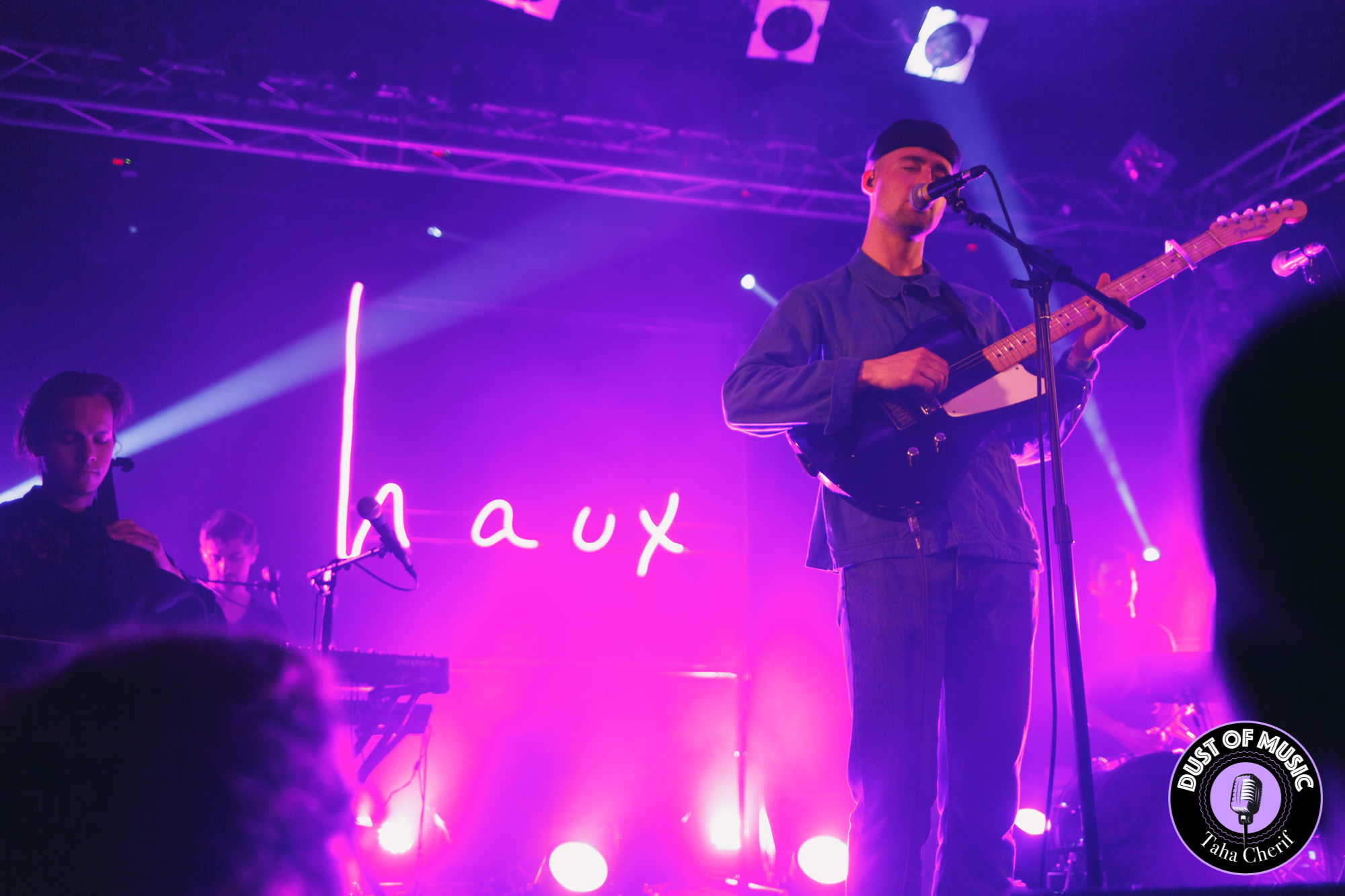 Haux at the Point Éphémère: an evening out of time4 min de lecture

Haux is one of those artists whose music is an open door to another reality. Somewhere between folk, alternative and a minimalist electro, his tracks are already making their way into some of the most prestigious streaming platforms’ playlists. We were very excited about this concert, and haven’t been disappointed.

Behind the stage name Haux hides Woodson Black. A multi-faceted artist, who is not only a photographer and a film maker, but also a musician. It is that side of his craft that interests us. At only 26 years old, he already has a good number of albums under his belt. He explained to us that he started writing when he was about 14, on his own. After graduating from a Music Business BA, it isn’t in his native New England that he decided to establish himself, but in Great Britain, closer to the European continent. 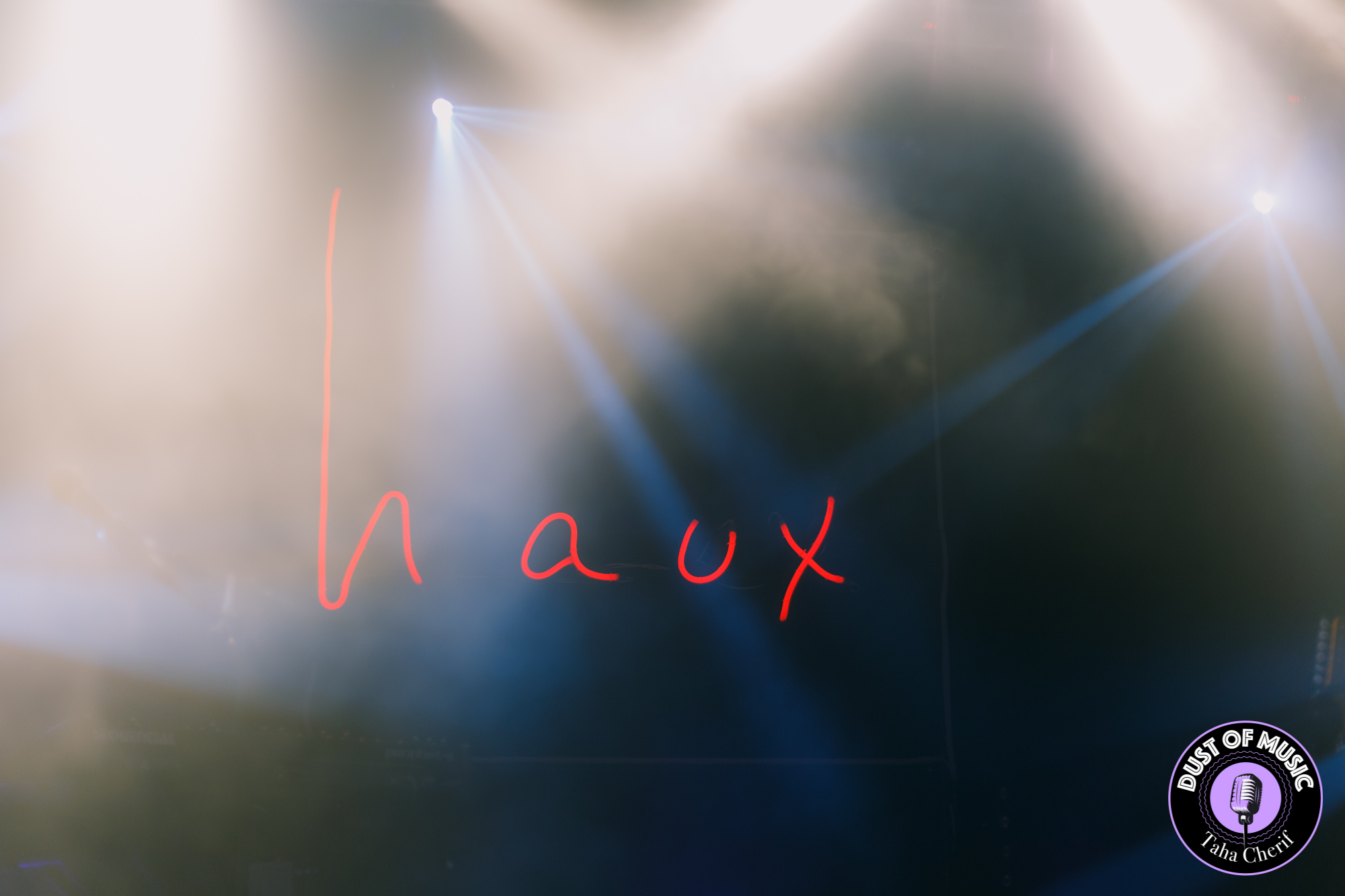 Indeed, his career skyrocketed in Europe. Haux admits in an interview: Europe provides a way more fertile ground for his art to develop. First promoted on Apple’s platform iTunes, then added to many playlists on Spotify, he benefited a great exposure. He also confided that he first toured in Europe, even before the United States. While his style mixes electro and different genres, his texts hit the chord. Love, solitude, separation, emancipation… So many themes that allow his music to resonate within each and everyone.

A sensitive and just concert

Announced a few months ago already, Haux‘s gig in Paris was long awaited. Although it wasn’t exactly a first for him, as he had already stopped in the City of Lights last October. The artist seems to be accustomed of being on the road, while still going strong across Europe, and meeting an ever-growing public. This time, he has some nice company. On one side stands Rosie Carney, young irish musician, whose music, also sensitive and soft, only needs a guitar and a soft voice to exist. On the other side stands Henry Jamison. With a rich and delicate style, both delivered touching, folk, and truly intimate performances. The crowd was standing in a religious silence, devouring each syllable, each note. 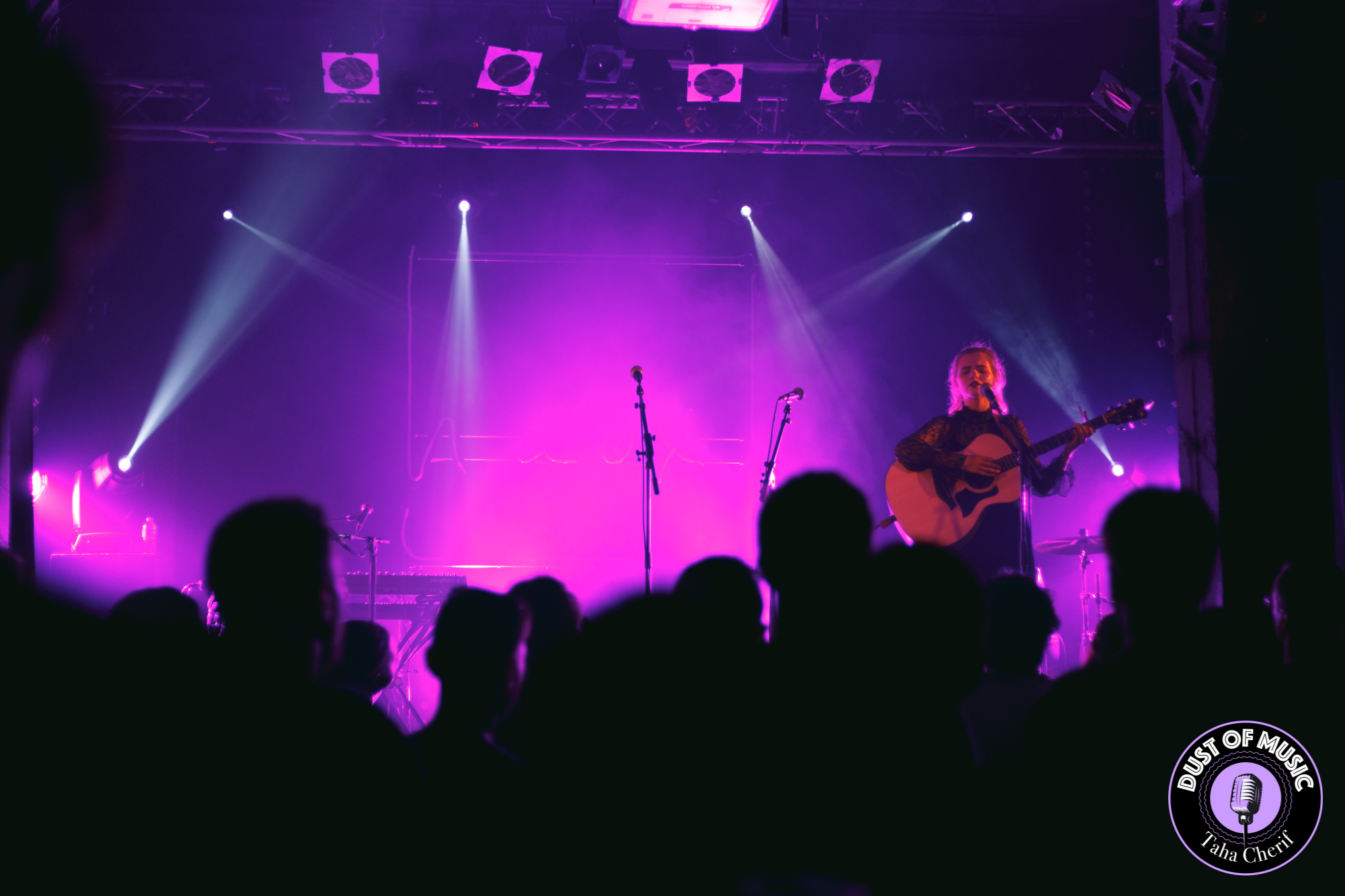 The time has arrived for Haux to hit the stage. The crowd is ecstatic, and the room full. The songs, arranged to suit the acoustic better, resonate. The first notes fill the place. The bass are heavy, the rhythms slightly more vivid, and Woodson‘s voice always so particular, vibrating, light. Surrounded by echoes and a strong reverb, it envelops us. We quickly dive into the characteristic warmth of his tracks. His texts have this almost uncomfortable nostalgia in them, but the public is delighted. Everybody sings along, engages, and enjoys this evening out of time.

This feeling of a complete disconnection is supported by a superb stage set-up, but also by a setlist that alternates intense songs to more delicate ones. From a photographic point of view, the impression is perfect. The lights fit the themes perfectly, sometimes blue-ish, sometimes truly warm, they do the set list justice. At other times, the room is completely sunk into a halo, with the sole figure of Haux emerging, standing on the stage, master of the room. 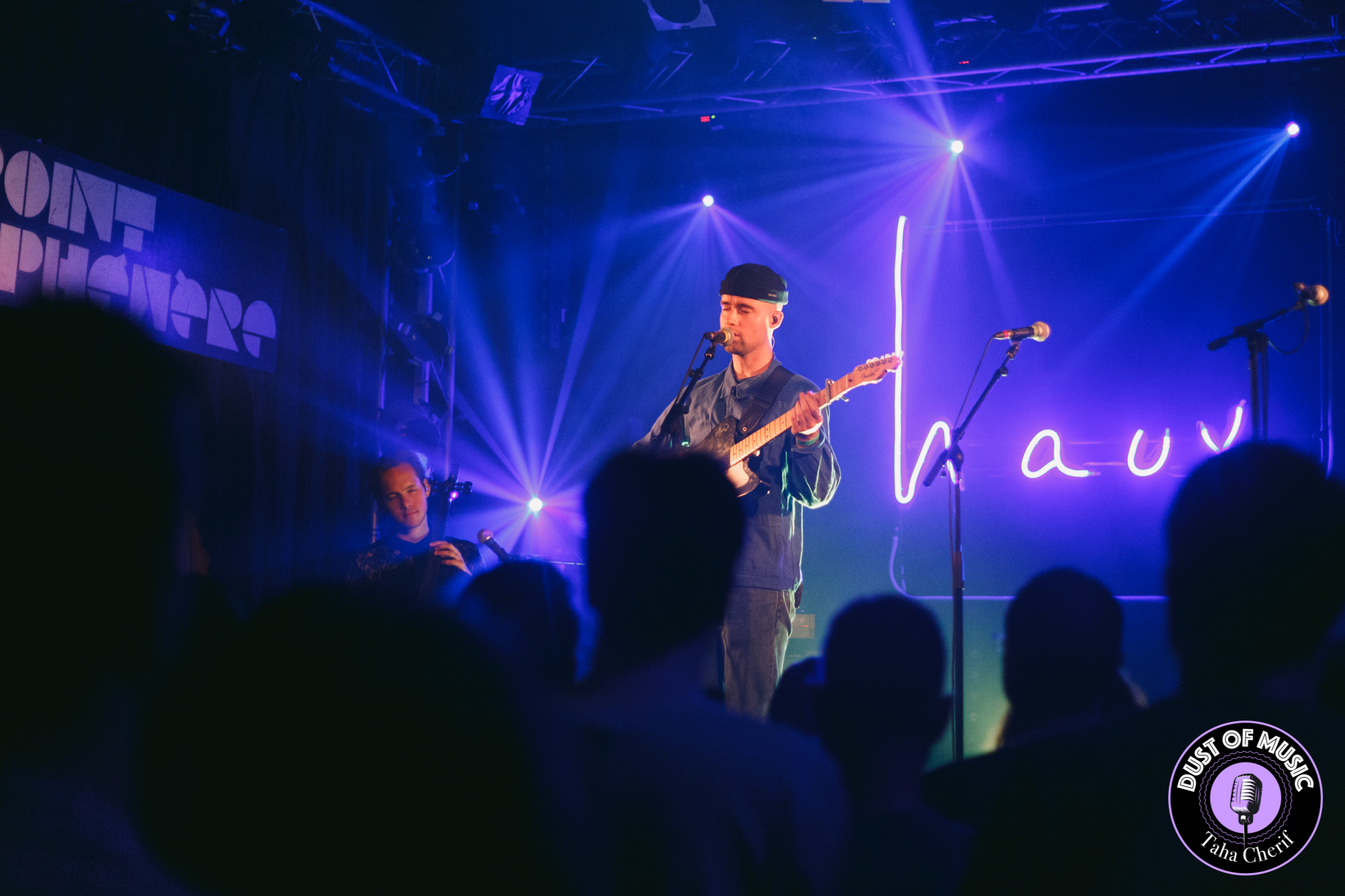 The set list, particularly long, combines older tracks with more recent ones. Cleverly put together, it allows the artist to share with his public an ever-growing discography. But it is also intense, as Haux‘s songs have a strong communicative power. The interpretations and meaning everyone can give to the lyrics give the tracks an even stronger resonance to the songs. The artist starts his concert with Cologne, about a lost love, continues with Alone, then Arrows… For more than an hour, the atmosphere is highly-emotional, while everybody sways slowly. 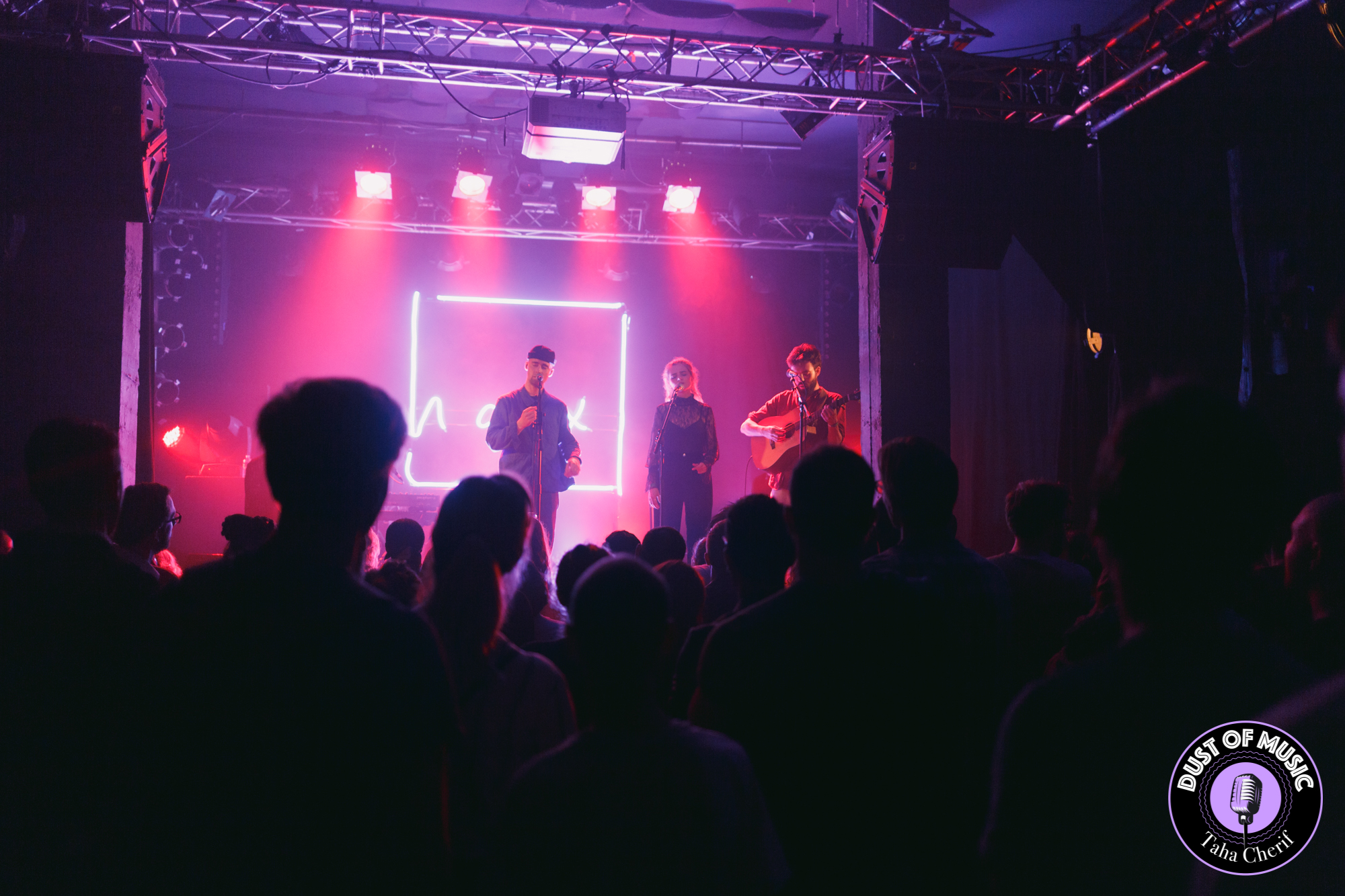 Listening to him, we can only imagine a vast place, where we could sit and watch him sing, again and again. Rosie and Henry then join him on stage, following with covers of Cigarettes After Sex and Bon Iver, powerful and federating. After each song, the applause lasts a little longer and louder than previously. I would like to rapidly talk about Touch, an incredible track, and relatively known from the general public, which representation was absolutely splendid. I felt, if I may say, emptied from any energy I had left in me, but I still wanted more. A concert that was as aesthetically rich as it was touching, and that felt as it was a celestial moment out of time. 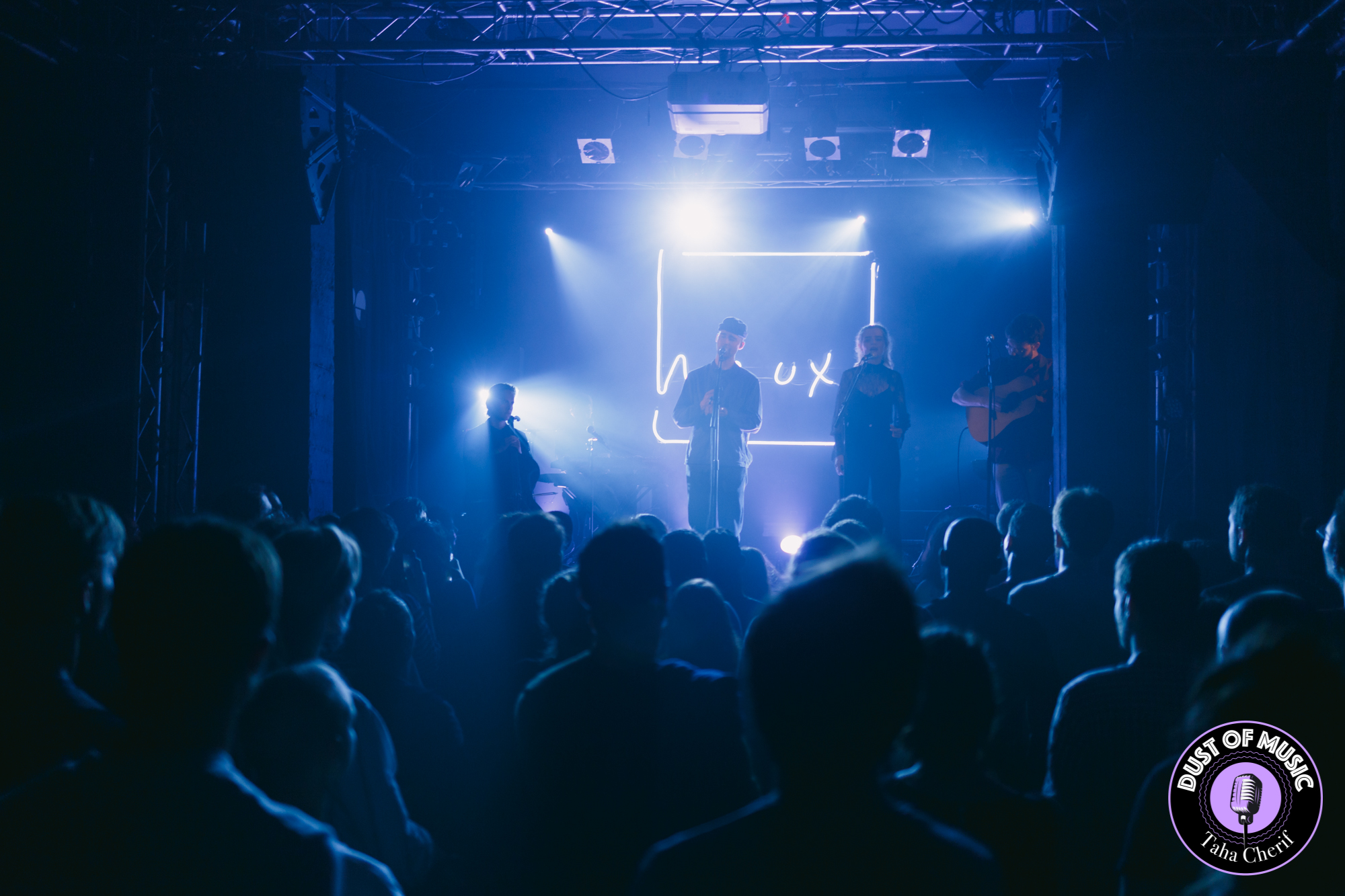